Marvel Universe LIVE! at The Palace of Auburn Hills 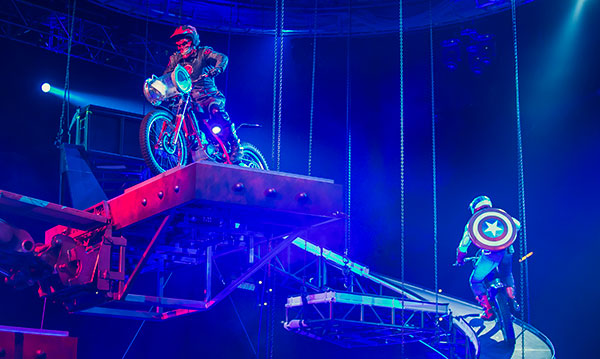 Step into heroism at the Marvel Universe LIVE! Sept. 25-27, 2015. More than 25 Marvel characters make an appearance in this live show, with some of Marvel’s most notable superheroes working together in stopping a mass destruction.

The story begins with the Mighty Thor destroying the Cosmic Cube, stopping its great power from getting into the wrong hands. After its demolition, Loki attempts to replicate it. Its duplicate power threatens the existence of Earth and the universe.

During their quest to collect the pieces of the cube, the superheroes encounter famous villains including Green Goblin, Doctor Octopus, Red Skull and Electro. Teaming up, the heroes must come together to defeat the foes.

“Marvel Universe LIVE! will be the most remarkable live event that the world has ever seen,” says Juliette Feld, the executive vice president of Feld Entertainment and show’s producer, according to The Palace of Auburn Hills event write up. “We are working hand in hand with Marvel to give fans a revolutionary live show experience.”

Approximately two hours long with a 15-minute intermission, Marvel Universe LIVE! caters to all ages. It reintroduces characters to some and achieves new admirers of young children who have not heard of the characters.

Do you have what it takes to stop Loki and his team? Feel the adrenaline as the story takes you through twists, turns, and tricks. Bring your inner hero and see the action, Sept. 25-27, 2015. Show times are as follows:

Tickets range $45-$150 and are available at Ticketmaster.

For more details on the Marvel Universe LIVE! at The Palace of Auburn Hills visit the Metro Parent calendar.