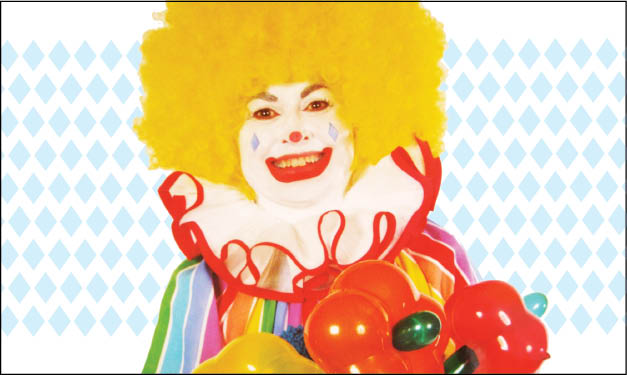 Gentle goofball. For metro Detroit clown Mary Ellen Clark, that’s been her calling card for 30-plus years – along with her poofy yellow wig, puppets and magic – at countless children’s parties.

“It’s so much a part of you. You forget you have it on,” says Clark of her clown costume – which constantly gets her stopped for photos when she’s out and about. “You become the center of attention. I don’t mind it. It makes you feel good.”

That’s what clowning, for Clark, is all about.

All in the family

Fittingly, for this local laugh-maker, clowning began as a family affair. Clark, a singer, and her husband Gerald, an English major, immersed their three kids in the arts from a young age. “They were interested in puppetry, magic and they could sing in tune,” Clark says.

The two parents had a unique home-school program for their children that quickly snowballed into a family show, complete with juggling and harmonicas. But one son was shy.

“So he wanted to dress up and look like a clown,” Clark says. The shtick stuck. At first, only the kids and dad dressed up. But over time, “one by one, the different ones stopped being clowns,” Clark says. By then, though, there was public demand. So, “I said, ‘OK, I’ll put the makeup on!'”

She’s been at it ever since. Today, Clark’s still delighting kids of all ages at birthday parties, business events, churches, conventions, RV rallies, family reunions – you name it. Don’t forget the theme shows, often for library programs, which range from trains or Olympics to bugs or bunnies.

It’s all delivered with her sweet touch. “I’m a non-intimidating clown, because I’m small and not loud,” says Clark, who wears white face paint, a starched ruffle collar and bright, disarming colors.

Clark often uses puppets who are scared of the kids as silly ice breakers, for one thing. Other timid kids see “nothing’s happening to those children who are participating,” she explains. “Before you know it, they’re coming up (too). I find that’s a good way to get them over whatever fear they had.”

And the birthday boy or girl is the subject of her favorite harmless joke: At the end of the show, she presents them with a gift – “A picture of me!” she declares – along with some other little prizes in a baggy.

“It does make you feel good when you come into a room and a little child will come over and give you a hug,” she says. “You can’t get a nicer feeling than that.”