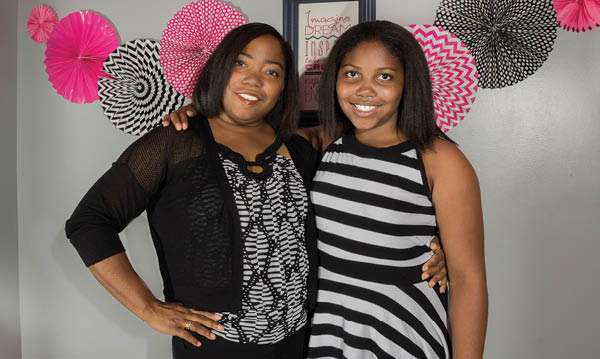 What if your daughter asked, “Why don’t we start a sewing school?”

Some moms may have promptly brushed aside such pipe dreams. But Toni Davison – who was working as a special needs paraprofessional at the time – took young Tiah’s idea to heart.

Barely two years later, that creation, Fashion Factory, has grown from a small studio at their Macomb Township home to a bustling entertainment enterprise.

“My husband Darrell was a little apprehensive when I said I wanted to buy four sewing machines and turn our den into a workshop,” Toni laughs. But today, Toni, Tiah, now 12, and the entire family are glad they took the leap.

Toni learned to sew at age 9. Her first project was a yellow panda tank top and camp shirt, which she wore to Cedar Point. “I felt like I was hot stuff!”

As an adult, Toni specialized in home decor – drapery, pillows and the like – and her youngest quickly picked up the needle and thread, too.

Tiah was a fashionista by age 4. She started out drawing dress designs to pass time at her older brother’s basketball games. Her grandma taught her to hand stitch those designs into doll clothes, then she graduated to the sewing machine with mom’s help. By 10, Tiah had won her first fashion design contest.

Toni was determined to fan the flame.

“I wanted to find a class for Tiah where she could meet other children interested in sewing,” Toni says. “We tried a few places, but once Tiah had progressed through the simple projects they offered, there wasn’t room for advancement.”

It was then that Tiah popped the question.

A stitch in time

The duo now spends their afternoons and weekends doing what they love most, and teaching others to love it as well.

Fashion Factory specializes in mobile birthday parties, arriving at houses with up to 12 computerized sewing machines and enough fabric, tools and supplies for each guest to complete a project such as a skirt or lounge pants they can wear home.

The fun begins weeks before with a guest-of-honor consultation to learn about favorite colors and preferences. Toni and Tiah then send out customized invitations, asking guests – groups of more than 12 are welcome – to include their clothing sizes when they RVSP. They’re then able to select the perfect fabric and pre-cut the patterns to the right dimensions, so party guests can concentrate on the fun part: sewing.

“Each party starts with a 20-minute lesson,” Toni says. “We teach them how to safely use the machines so they’re confident as they get started.”

Tiah, Toni and helpers they call their Glam Squad monitor kids’ work and offer guidance. “Many of them start out worried they won’t be able to sew straight stitches,” Tiah says. “And then they’re amazed to see what they’ve created at the end.” It was her idea to add a Project Runway-inspired accessory table so designers could customize their looks for the fashion show finale.

The Fashion Factory has definitely been a family affair – one decades in the making. Toni’s mother, Alberta Smith, was a seamstress for years.

“She sewed for all the church ladies, making bridal gowns and prom dresses,” she says. “I’d like to think she taught me everything I know, but I suspect she held back a few things so I’d keep calling on her for advice.”

Toni is grateful her mother had the chance to mentor Tiah, too, and that she was able to see the Fashion Factory blossom before she passed away this fall.

Toni’s 20-year-old son, who goes by Wal-doe East, didn’t sit at his mother’s feet like Tiah did, but waited until college to take up sewing.

“He went to New York’s Parsons School of Design to study graphics and photography,” Toni says, “and, through their integrated program, got hooked on industrial sewing machines.”

Tiah is likely to follow in her big brother’s fashion footsteps. But she’ll do so with her own flair.

“I want to learn more techniques and then start selling my things when I’m 16,” says Tiah, who makes plenty of handcrafted bags and book covers her friends often admire. “I’ve already planned it all out.”

Mom is both beside and behind her, even setting her own career aside. They’re good partners – and clearly close, finishing each other’s sentences and talking like BFFs. Toni says she’s devoted to helping Tiah explore her passion, but doesn’t direct or overstep when Tiah is competing in local contests.

Indeed, Tiah seems to have things all buttoned up – starting with a business operating out of her very own home.

Toni is always looking for new ways to present the antiquated art of sewing.

“With STEM programs being so popular now, we’ve added e-wearables to our lessons,” Toni says. “Through circuitry and programming, kids can make their sewing projects light up, blink in patterns and react to speech or movement.”

And one of Toni’s personal joys is hosting mother-daughter sessions so the old Singer in the corner can stop collecting dust. She likes to say, “We’re helping unbox sewing machines, one family at a time.”