What did our local crafter – and a couple of her pals – think of this 3D pen? Get the scoop here. 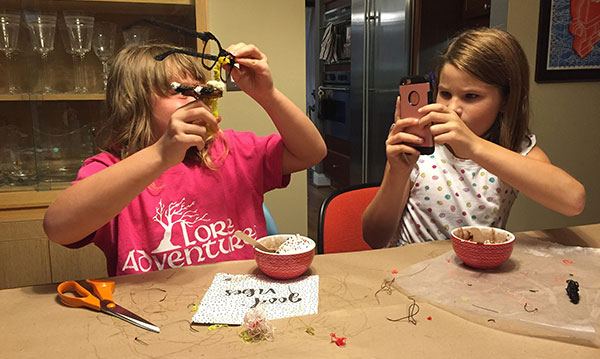 3D printing has been around since the 1980s, but it wasn’t until just a few years ago that the masses became familiar with this technology. With companies like MakerBot and global events like Maker Faire, 3D printing is something that just about anyone can try thanks to hands-on kits and experiences. Today you could print a small toy at home, visit a 3D printing lab in your child’s school, or even print your breakfast. Printing is anything but flat today.

For those junior makers who are curious about 3D printing but aren’t ready to spend a lot of money getting set up, there’s the 3Doodler. Billed as the world’s first 3D pen, the 3Doodler allows its users to draw in the air. You can trace designs or go freehand and create a one-of-a-kind piece. Within the #WhatWillYouCreate community, fans have made everything from small models to pieces of clothing.

Earlier this month I had the chance to put the 3Doodler to the test with two of my favorite metro Detroit junior makers, Robin and Abby. Both new fourth-graders in the Grosse Pointe community, Robin and Abby enjoy hands-on creating and were eager to see what the tool was all about. If you’re curious to hear what two 9-year-olds thought of their first time 3D printing, read on.

For our evening of doodling, Robin decided to make a freehand design of her own (an ostrich) while Abby decided to practice tracing an image to create a pair of retro glasses. It doesn’t take long to get going with the 3Doodler – simply plug it in, let it heat up for about 60-90 seconds, and you’re ready to create. The pen is essentially like a glue gun; thin pieces of colorful plastic are inserted into one end of the pen and are pushed through to the tip to create “ink.” If you hold the pen in the air, the plastic will wiggle out and create fun shapes. If you hold to a tracing surface, it looks a lot like glue.

Tracing the image for Abby’s glasses was a great first project for the 3Doodler. She got used to manipulating the pen and filling in open spaces.

Once she had all three pieces made for the glasses, she even learned how to “solder” them together by adding additional plastic at the joints.

For Robin, creating something without a pattern was also interesting practice for a 3Doodler novice. She learned how to change colors (which you can do), as well as work the plastic to create the 3D shapes she wanted. For excess plastic on a design, you simply trim it off with scissors once it’s cooled.

As the grown-up crafter assisting these two makers, I did notice the pen did get jammed every now and then. The 3Doodler helps you troubleshoot this issue by including a few small tools in the starter kit and instructions on how to overcome this problem. Even when this happened to us, the girls were having such fun creating that they didn’t mind waiting.

One other thing to keep in mind is that the end of the stylus is VERY hot. The girls worked with carryout chopsticks to help manipulate the plastic as they were working and were reminded not to automatically grab the plastic as they might be inclined to do.

Overall, doodling with the 3Doodler is a lot of fun. Both Abby and Robin added the tool to their Christmas gift lists before the night was over and were already brainstorming their next projects and designs.

If your child is curious about 3D printing, look no further than the 3Doodler. Follow them for more project and doodling inspiration.