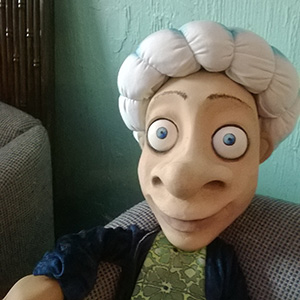 How far would you go to find happiness? A boy goes on a long journey – and learns some important lessons – in Mouk’s Adventures, the latest original show at PuppetART in Detroit. It’s showing select dates April 5-27, 2014.

This all-new production, steeped in Arabic folklore and featuring beautifully crafted rod and table puppets, follows Mouk through the “arid lands” of the Middle East. Along the way, he meets a sheikh king character, a cook – a crazy cat lady, too. Mouk even finds a magical stick that leads him to treasure! But only by the end does he find happiness (hint: It has nothing to do with money or power).

Be sure to watch for the backdrops and characters’ outfits – and listen to the music. PuppetART took great care to make these details “culturally sensitive,” even consulting with experts like the Arab American National Museum in Dearborn, says marketing/development director Julien Godman. “We really put forward a show that definitely embodies some of the true aspects of Arabic culture.”

Geared at ages 5 and older, Mouk’s Adventures runs about 50 minutes. It joins this unique theater’s repertoire of other globally diverse plays, whose themes range from Latin American and Russian to Japanese and West African. This will be PuppetART’s first new production since Snow Queen debuted in 2011 (another, The Little Prince, more geared at adults, will be hot on its heels in 2015).

Tickets for Mouk’s Adventures are $10/adults, $5/kids and $8 for a workshop following each show, in which kids make their own rod-style Mouk puppet. Performances are at 2 p.m. on the following dates:

For directions and a basic overview of Mouk’s Adventures at PuppetART Theater in Detroit, swing by the Metro Parent calendar listing.