MythBusters: Behind the Myths at Fox Theatre in Detroit 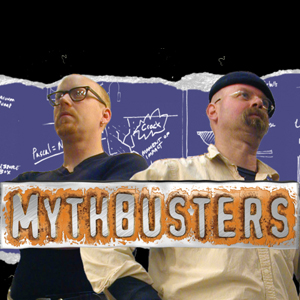 Is bulletproof glass really bulletproof? Can a person be launched by rockets strapped to a chair? Are there people who actually test these theories?

Oh, yes! Dynamic duo Jamie Hyneman and Adam Savage have been the Discovery Channel's resident MythBusters since 2003 – and now, they're bringing their antics and kick-butt experiments to the Fox Theatre in Detroit for MythBusters: Behind the Myths on March 16, 2012.

On their Emmy-award nominated TV show, the guys seek to prove or debunk urban theories through wacky, and often explosive, science experiments. You name the theory. Chances are that they've tested it. The pair's courageous and crazy efforts have made them a fan favorite on the small screen. So bringing their show to the stage is what we'd call a genius idea!

On-stage experiments, audience participation and behind-the-scenes stories are just some of the things the audience can expect. Whether you're young or old, this show has something for everyone. For adults, their wit and comedic timing will keep you more than entertained – and you'll learn something, too. As for kids? The guys make learning science way more fun than reading about it in a textbook!

The Discovery Channel show is so popular that a second stage performance was added to the Detroit lineup. Now, you can catch the dudes live on stage at 4:30 or 8 p.m. in a pair of awesome Friday shows. Tickets range in price from $35 to $125.

See the Metro Parent listing for more on MythBusters: Behind the Myths at the Fox Theatre in Detroit.

Looking for a podcast you can trust to give facts about important topics? Look no further.
Read more
Tweens & Teens

As teens get older, they might make friends with an older person — maybe even a young adult. Is this OK, and what rules should you enforce if you allow it?
Read more
Guides