Get a new book, check out pieces of comic book history or immerse yourself in a magical fantasy world at these three rad comic attractions in Michigan and beyond. 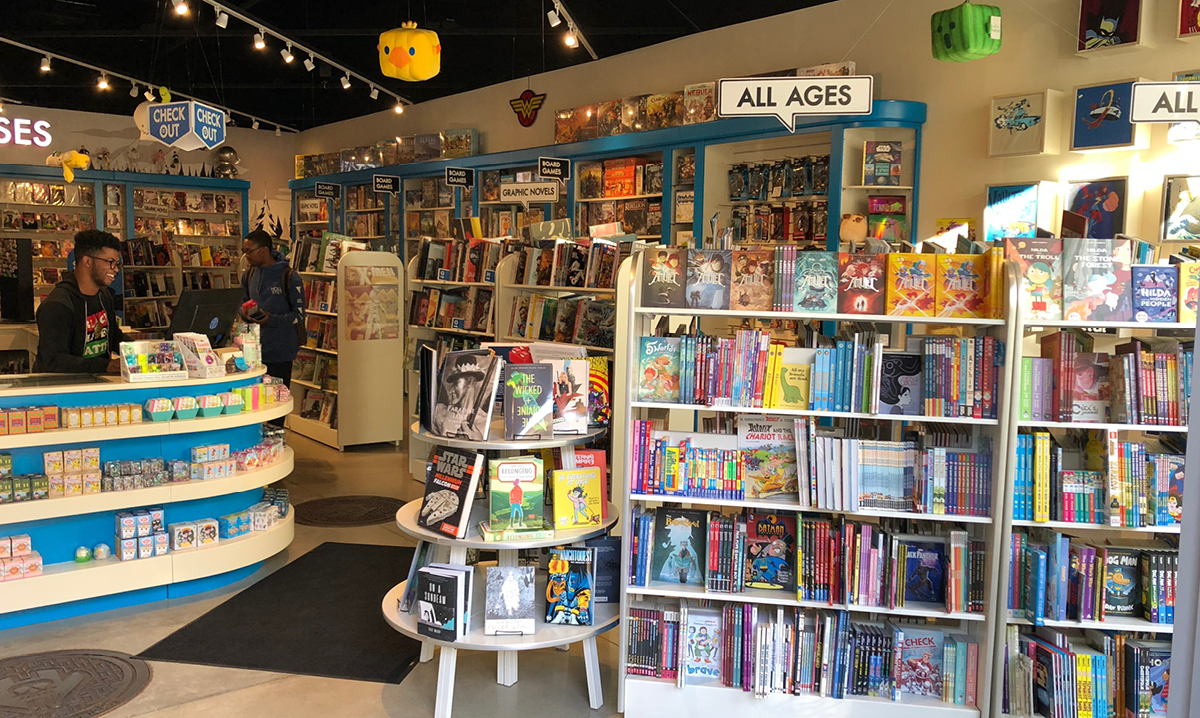 Is your child obsessed with comic books? Like classic books, these reads provide kids an escape from the real world and encourage reading in all ages.

If you’re looking to spruce up your child’s comic collection, take them to a shop in Ann Arbor to nab a new title or add a little fantasy flair to your next family vacation at two unique comic attractions in Indiana and Florida.

Head into the vault for some seriously cool comics

“They just bring a new sense of adventure and can inspire kids to be creative,” Amanda Reyes Aquino says about the appeal of comic books for kids of all ages.

As the store manager at Vault of Midnight in Detroit, a comic book hotspot tucked into an airy space stacked with graphic novels and pop culture classics, Reyes Aquino relishes introducing first-timers to the joys of reading comics. She encourages families to ask for help finding that perfect comic book series.

“The first thing I would say is to talk to one of our staff members – everyone is super well-versed in comic books for all ages,” she says. “One of my favorite things to do is to help a little kid find just the right comic.”

The store stocks plenty of family games, too – the staff can guide you toward one that’s sure to become a hit at your house. Vault of Midnight is even partnering with the Detroit Public Library’s Skillman Branch on Nov. 3, 2018 for a family game day.

“The one thing I always think about with comic books is they are real books – they take just as much time and effort to read – they’re just easier for some,” Reyes Aquino adds.

So which comic series is best for families? She couldn’t pick just one. Her best advice is to come in, get some guidance and then browse the stacks.

Visit the shrine to all things superhero

Packed with collectibles and memorabilia, the Hall of Heroes Superhero Museum in Elkhart, Indiana includes both nostalgic finds and more recent comic favorites.

Take your time marveling at Adam West’s Batman costume that he donned for appearances in the ’70s and ’80s – “Holy bat tights, Batman!” While your kids may breeze over the rare comics, they’re likely to be drawn to the low-flying convertible that Robert Downey Jr. rode in as Iron Man.

Wend your way through Diagon Alley

Get whisked away to Diagon Alley to enter a realm of magic as part of Universal Orlando Resort’s The Wizarding World of Harry Potter.

There, your family can venture to some of the Wizarding World’s top destinations like the Leaky Cauldron, Ollivanders (to pick out a wand, of course) and Gringotts bank, which is now a twisting and turning thrill ride.

Your kids may be extra eager to visit in November since the second Fantastic Beasts movie will be coming out – The Crimes of Grindelwald premieres the 16th.

Photo from Vault of Midnight