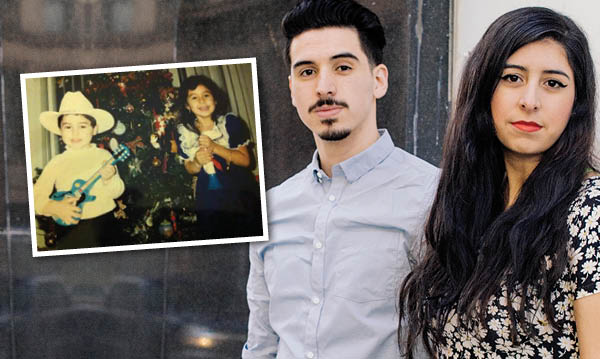 The White Stripes were an inspiration to the Chavezes – Mimi, 23, and Nino, 22. But, unlike the famous Detroit rock duo, these up-and-coming local musicians are real siblings. Their band is The Old Adage, and they live and create their indie-pop out of their old family home in Monroe County.

“It’s convenient,” Nino says. “We’re on the same page for everything. We can find time for recording and writing. We help each other out a lot.”

While they’ve worked as The Old Adage for five years, this sister and brother started making tunes back in middle school. “It’s nice to share writing music with your siblings,” Mimi says. “We’ve had a lot of the same experiences.” Mimi taught Nino how to sing and he taught her how to play a few instruments. Even as kids, Mimi showed Nino how to tie his shoes and ride a bike, he adds.

Mimi sings and plays the keyboard while Nino covers the other instruments and some vocals. As for writing, Mimi says it’s a shared responsibility that comes easily. “It feels like we’re twins. One of us will have an idea and the other will branch off.”

Check out their latest music video for “Get Loose,” a song on their 2016 release Cycles.

… so we asked the Chavez siblings what they love most about each other.

“He’s a hard worker and he’s talented,” Mimi says. “He’s the person I can relate to the most – the person that’s the most like me, even though he’s a lot different from me.”

“She’s always been my older sister, so I’ve always looked up to her,” Nino says. “She has the same goals and ambitions, and it’s nice to have someone there all the time.”