Peter Pan at the Fox Theatre in Detroit 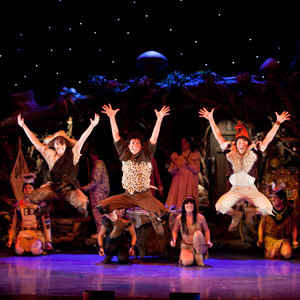 Who says growing up is mandatory? Peter Pan definitely doesn't think it is – and you don't have to, either! Parents, take a trip down memory lane and revisit your childhood – with your little youngsters, of course – because Peter Pan will be live on stage at the Fox Theatre in Detroit, from April 19 until 21, 2013.

Bring a world filled with mermaids, pirates and fairies to life as you introduce your tots to this two-time Emmy Award winning and two-time Tony Award nominated production directed by Glenn Casale, who has worked on over 550 shows at the California Musical Theatre.

Cathy Rigby – who was nominated for a Tony Award for Best Leading Actress in a Musical in 1991 for her performance in the 35th anniversary production of Peter Pan on Broadway – will lead your family into a world of adventure as she plays Peter Pan in this magical production. Performers Brent Barrett – who plays Mr. Darling and Captain Hook – and Kim Crosby – playing Mrs. Darling – will be accompanying Rigby on stage as they bring Neverland to life right here in Detroit.

So, fly on over to the Fox Theatre to see Peter Pan soar in this aerial-infused performance, which family members young and old can enjoy – and get lost in for a couple of hours. Ticket prices range from $30 to $70.

Show times for this family-friendly production are as follows:

See the Metro Parent listing for Peter Pan at the Fox Theatre in Detroit.