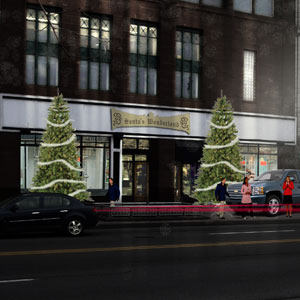 If the kids are antsy to give gifts of their own this holiday season, head to Santa’s Wonderland in downtown Detroit – a shop designed especially for little ones to buy and wrap inexpensive presents for their relatives.

The kid-oriented holiday pop-up shop opened Nov. 16, 2012 as part of Holiday DLight: Made in Detroit, a Detroit retail strip sponsored by Quicken Loans and The Somerset Collection‘s CityLoft on the 1200 block of Woodward between Grand River and Gratiot avenues.

All gifts at Santa’s Wonderland are a maximum price of $5, and all proceeds from the shop go to the Detroit Goodfellows, says Jonathan Shihadeh with Quicken Loans public relations. Last year, he adds, the shop was located inside CityLoft in Detroit, but this year it will have its own storefront.

Linda McIntosh, marketing director at Somerset, says Santa’s Wonderland lets kids “shop and wrap gifts in a space designed just for them” – making it a “completely unique” experience. “(It’s) unlike any other retailers in the city,” she adds.

Also in the Holiday DLight row of shops this year will be Moosejaw, The Detroit Shoppe, Detroit Art Shoppe, Spinergy fitness studio and Papa Joe’s Snack Rack – plus the stationary Somerset Collection’s CityLoft with more than 40 stores.

The storefronts “will bring retail back to downtown Detroit for the holiday season,” a Quicken Loans press release says.

While you’re in town, stop by Winter Magic, running Nov. 16, 2012-March 3, 2013 for activities and events such as ice skating at Campus Martius Park – also sponsored by Quicken Loans.

Santa’s Wonderland will be open from noon to 9 p.m. Thursday-Saturday until Dec. 22. The shop is closed on Thanksgiving Day (Thursday, Nov. 22).