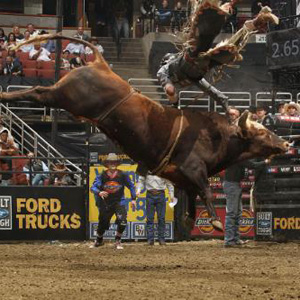 Yee-haw! Saddle up and grab your boots, cowboys and cowgirls. The Professional Bull Riders are bringing the rodeo to Detroit's Ford Field on Saturday, March 10, 2012.

For the first time ever in this neck of the woods, the world's top 40 bull riders will take on the toughest and roughest bulls – who weigh as much as 2,000 pounds (that's a whole ton, pard'ners) – as part of the Built Ford Tough Series (BFTS). "The Last Cowboy Standing" Detroit Invitational will have a total purse of more than $100,000, including $30,000 for the winner.

The invitational, which will be a new annual event in Detroit starting this year, will feature past champions and competitors from previous BFTS World Finals, such as 2011 World Champion and 2010 Rookie of the Year Silvano Alves. Points and money earned from the competition will go toward the finals, where the best bull-wrangler gets a $1 million bonus to accompany the much-sought-after World Championship buckle.

Get into the bullpen with BFTS's Detroit Invitational at 8 p.m. before the 23-state tour concludes in Las Vegas. Tickets begin at $10 and can be ordered through the Ford Field box office, by phone or online.

Check out Metro Parent's listing for this event to get more information on the Professional Bull Riders Built Ford Tough Last Cowboy Standing Event at Ford Field in Detroit.

Find something funky to see this year at these weird roadside attractions in Michigan.
Read more
At Home