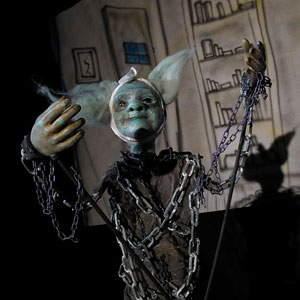 Matrix Theatre's version of the holiday story focuses on Pecunia Scrooge, a selfish and crotchety storeowner who only cares about making money for herself. But Scrooge's employee Bob Cratchit has to manage his pennies to take care of his struggling family. It isn't until three ghosts visit Scrooge that she learns how her selfish ways hurt others.

Megan Buckley-Ball, director of production at Matrix Theatre, says the show is set in southwest Detroit, allowing local viewers to feel connected to the show and its characters.

"Our focus, no matter what we're doing, is to create community," she says, noting the theater's hopes for people to talk about the places they've been in southwest Detroit after the show and reminisce.

Matrix Theatre has been keeping a blog of the behind-the-scenes work on their shows – including Scrooge – called Matrix: Behind the Scenes. On Nov. 27, the group blogged about the production, announcing the "delightful, family-friendly production" is "the best one yet!"

This year's production will have a lot of audience participation, the group blogged. Director Carrie Morris will be adding benches close to the stage for kids to sit and participate in the show, they add.

Overall, the show is "funny for kids and adults," Buckley-Ball says.

"Kids, regardless of age, are able to very easily follow the story and take away the moral of the story," she says. "(It's a) really good learning experience for the whole family."