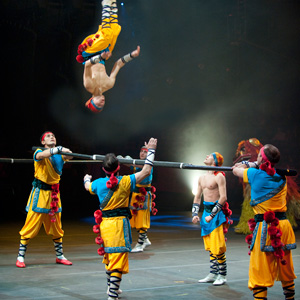 An electric circus is coming to town! The Ringling Bros. and Barnum & Bailey new circus show "Fully Charged," will be at the Palace of Auburn Hills, Nov. 7-11, 2012.

On the bill is Tabayara, an animal trainer with a rare ability to communicate with animals allowing him to control four-ton Asian elephants and stand inside the cage of 12 ferocious tigers.

The fearless Fernandez Brothers will also be wowing audiences with their daring aerial stunts, including a 360-degree forward somersault three stories up in the air.

Flying 80 feet at 65 miles per hour will be the Human Fuse, Brian Miser, who will rocket across the arena from his human crossbow.

Last but not least are the Ringling Bros. Clown-Alley clowns, bringing laughs and shocking audiences with their silly antics. Cue the sparks and smoke.

Of course, there will be plenty of treats for kids and adults sold at concessions throughout the day, including memorabilia and fun toys.

Tickets range from $14-$22 and can be purchased online or by phone.

See the Metro Parent listing for more on the Ringling Bros. and Barnum & Bailey Circus at the Palace of Auburn Hills.