Samurai: Beyond the Sword Exhibit, Detroit Institute of Arts 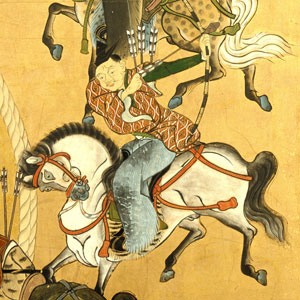 Helmets, face masks and paintings tell the story of the Japanese samurai – a military leader, regional lord and soldier – as the Detroit Institute of Art displays some 130 pieces of artwork for the Samurai: Beyond the Sword exhibit.

This exhibition will be on display at this Detroit cultural spot from March 9 until June 1, 2014. It gives visitors an in-depth look at the samurai. "Samurai means 'one who serves' and, at one point, they were warriors who served Japan's emperor and nobility as swords for hire," the DIA explains in a release about this new attraction.

A walk through the exhibit brings history to life for kids and adults – and helps teach children about all the things a Japanese man needed to know in order to become a samurai.

Along with the displays, there are tons of cool programs that have a Japanese theme. On Sunday, March 9, which is Family Sunday, Harumi Omitsu plays traditional Japanese music at 1 and 3 p.m. Catch an artist demo 1-4 p.m. Sunday March 16 – or enjoy storytelling at 2 p.m. on Sunday March 23. There will be lectures and films, as well – something for everyone in the family.

Explore this exciting new exhibit during normal museum hours, which are as follows:

Note: The museum is closed on Mondays.

This special exhibit is ticketed, which means there is an additional cost to view it. Exhibit fees are $16/adults and $8/ages 6-17 and free/ages 5 and under. You must also pay general DIA admission, which is free/tri-county residents (Wayne, Oakland and Macomb counties) and, for others, $8/adults and $4/kids.

See the Metro Parent listing for the basic details on the 2014 Samurai: Beyond the Sword exhibit at the Detroit Institute of Arts.