Skiing and Snowboarding in Michigan

Stop fighting the cold weather and snow and embrace it, instead – by taking up a winter sport with your kids. 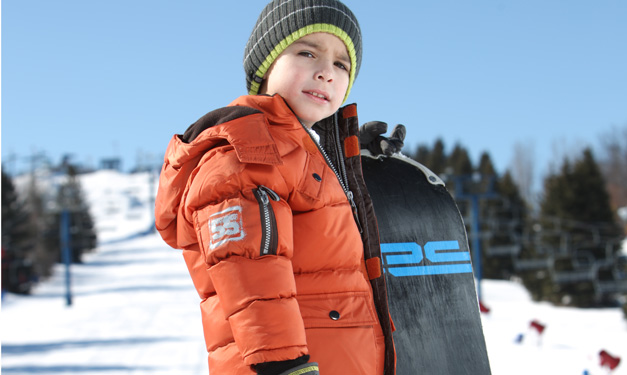 It may be cold outside, but that doesn’t mean your kids should spend hours in front of the TV or locked in the house. Get them outside to revel in winter sports! Before you hit the slopes, though, here’s a primer to get your pumped up about these snowy fun activities.

Downhill and cross-country are the most popular types in Michigan – plus they’re easy for beginners. Parents can get kids acclimated with the equipment and concept early, even if they don’t truly ski until later.

Skiing requires two boards and poles. A person stands with one foot on each ski. Skiers are bound along the length of the board so that their feet face straight. They use skies to propel themselves across the snow.

Erin Ernst, public relations manager for Boyne Mountain and Boyne Highlands Resort in Northern Michigan, says kids as young as 3 are able to attempt the sport. Pam Deibel, the ski school director at Mt. Holly Ski and Snowboard Resort in Oakland County, in notes that kids aren’t usually able to really get the idea until age 5 or older. Because it takes strength and a bit more muscle, it may be harder for younger children.

These days, every ski resort in the state allows snowboarding. The sport even has Michigan roots: Muskegon resident Sherman Poppen is credited for popularizing it starting back in 1965.

Snowboarding is vastly different from skiing in both technique and equipment. It requires a solid, wide, single board, for one. Bindings, which connect both boots to the board, are side-by-side, so your feet face sideways. Position-wise, a person is practically sitting.

There are many types of snowboarding – including freestyle and freecarve – both of which require different skill levels. “Everyone starts at what you would call a freeride-style of snowboarding – go anywhere, do anything type of riding,” says Ernst.

Because snowboarding is initially more difficult to learn, Deibel suggests kids ages 7 to 8 attempt it. And while she’s seen younger children try, it isn’t always easy to keep them engaged.

“It’s recommended that beginners rent their first few times out to get a feel for the sports and the equipment,” Ernst says.

Resorts have boot, pole and helmet rentals – perfect for people who are new to the sport or don’t have extra cash for the investment. Everyone who goes out on the hill also must purchase a lift ticket.

Prices for the tickets and equipment often range by age. Contact the ski resort or search for information on the web in advance.

Chances are that you already own some, if not all, of the clothing you’ll need. Warm clothes, gloves, hats and scarves are a must. Protective eye gear to keep the snow out of your eyes is also a good investment.

Dress in layers and make sure the outer clothing layer is semi-water proof. And for gloves or mittens – no knit! Durability is a must, along with a fleece or synthetic-based insulated liner. You want them to be waterproof, too. The last thing you want is a case of frostbite.

When it comes to gear, there are tons of companies and price ranges. The North Face, Columbia, Burton and Marmot offer clothing for snow sports, while Smith and Oakley are two brands of goggles. Searching snow gear or snow clothing online will display loads of places for you to shop.

While clothing and equipment are necessities, there is one important thing ever beginner should do – take lessons. These provide the tools and info kids they need to learn proper technique and be most successful, Deibel and Ernst agree.

Sandy Reich, Boyne Mountain’s SnowSports Academy children’s program director, says kids learn step-by-step, starting with the basics – showing them to put on their skis and walk in them.

Kids learn the crucial ability to stop on their skis or snowboard, so they don’t injure themselves. From there, they’re taken up the hill on a Magic Carpet conveyer ski lift. This alternative to the chair lift makes it easier for kids to mount the hill. Next, the kids are taught how to turn.

As children progress, they are on their way to skiing without the help of a teacher – hitting the slopes on their own.

The pronunciation doesn't matter — just know that the new variant is the most contagious COVID-19 strain so far.
Read more
Guides

Family Movies Coming Out in 2022

2022 is welcoming tons of family-friendly flicks. Here are 19 of our favorite kids movies coming out this year.
Read more