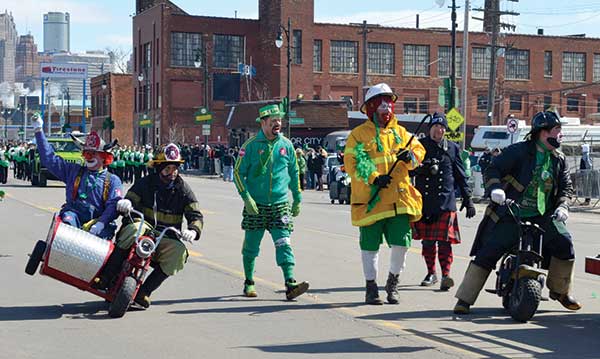 St. Paddy’s Day isn’t all about the green beer. Wee leprechauns can join in the fun, too. And on March 15, Detroit’s Corktown neighborhood offers just the right mix.

The St. Patrick’s Parade is back for its 57th annual march – and, for the past 15 years, chairman and dad Michael Kelly has run the show. “It’s a family day for the kids to come out and share their Irish heritage,” he says. Whether you’re Irish or not, of course!

Expect big, bonny turnout to see all those floats, clowns and pipe and drum bands. Even with brutally cold weather last year, over 25,000 gathered, Kelly says. Over the years it’s created lots of memories for his kids, too – Matthew, 25, Colleen, 24, and Brigid, 21. And all three are still involved.

“They have been active in the parade since we pulled them in strollers and wagons,” says Kelly, who grew up in northwest Detroit and now lives in Livonia.

The 2015 affair has an “Ireland’s Four Green Fields Will Bloom Once Again” theme. Thinking of attending? Kelly offers parents some helpful tips.

1. Arrive early. The parade steps off at noon sharp, but it’s best to get there early to get a good spot. “Park on the north or south side of Michigan Avenue,” Kelly says. “You can also park on Trumbull Street and the lots behind the Irish bars.”

3. Shop around. No freebies are strewn about, but you can buy reasonable Irish merch from street vendors. “We’ll have Irish T-shirts, hats, beads – and all types of things,” Kelly says. “You can also order photos, posters, cards and magnets capturing moments.” Just visit the parade website after to contact the photographer.

The St. Patrick’s Parade
When: Noon Sunday, March 15
Where: Starts at Michigan Avenue and Sixth Street, Detroit (steps off at the Irish Plaza and heads west towards Roosevelt Park)
Phone: 313-475-4675

A grand Irish parade hits Oakland County, too. The Norman O’Brien Division of the Ancient Order of Hibernians hosts this family-friendly brouhaha. Be Irish all weekend – and learn more about this event online.