The Story Behind Marshmallow Drops 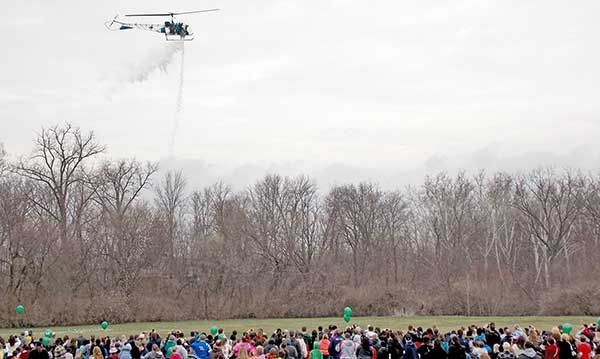 Nothing says spring like … a mass of marshmallows raining from the sky? It does if you’re a metro Detroit family. Friday, April 3 marks Wayne County Park’s 31st Marshmallow Drop, happening at 9 a.m. at Elizabeth Park in Trenton and 11 a.m. at Nankin Mills Park in Westland (they squeeze one more in between in the city of Wayne). It’s a sight to behold: Thousands of fluffy treats stream from a helicopter – the Easter Bunny’s, of course – as kids scramble to scoop ’em for prizes. Ever wonder what goes into this wacky tradition? Us, too. Here’s what WCP told us.

1985. This was the very first drop. Rumor has it all the marshmallows fell – in one big clump! Which led to the tradition of volunteers “flouring” the treats beforehand.

1+1 = 1. One kid and one marshmallow means one prize (this year it’s a WCP water bottle). It only takes one treat to get one prize. There’s no competition.

Magic color. One single marshmallow is a different color. The lucky kid who gets it wins a large gift basket. What’s the color? It’s a secret!

Don’t eat. People, seriously. They’re coated in flour and lying in the grass/mud. No.

20,000. Number of marshmallows dropped in the two WCP events.

40 pounds. Amount of flour it takes to keep them from sticking together.

Dave James. This is the pilot who flies E.B.’s chopper. He’s with local Helicopter Services.

A local mom of two shares the parenting mantra that she lives by.
Read more
Sponsored Content