Teaching Kids How to Whistle

It seems like such an easy thing, but it's so tricky! Here are tips for teaching kids how to whistle, so they'll be making music with their lips in no time. 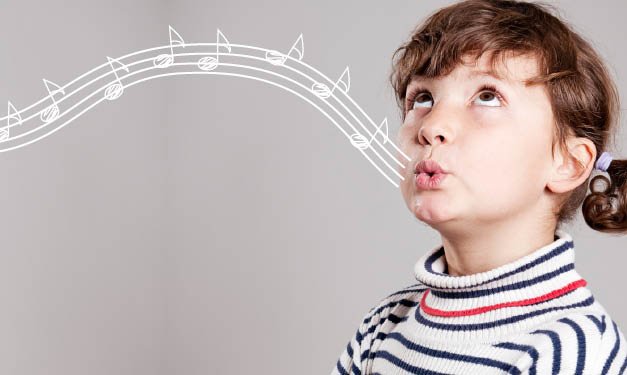 Just purse your lips and blow. Sounds easy enough. But, like tying shoes or riding a bike, whistling is one of those skills we grownups tend to take for granted. It’s only when we try teaching kids how to whistle that we realize how darn tricky the whole business is.

Whether it’s to call the dog or make a little music, though, the art of whistling can be useful — and just downright fun.

It’s also key to remember that for most of us, this talent certainly didn’t develop overnight. Nor did we learn to carry a tune without some hard work, a bit of frustration and exhaling until we were blue in the face.

That is, unless you’re Steve “The Whistler” Herbst.

Inspired by his father’s whistling, Herbst, a professional whistler, actually taught himself the tricks of the trade at the ripe old age of 7.

So he seemed like the perfect source to gather some tips on the subject of teaching kids how to whistle.

“It almost feels like I’ve always been whistling. I don’t remember the initial struggle or the initial breakthrough,” says the father and grandfather, recalling the days he spent locked away in his bedroom, whistling to records like Prokofiev’s Peter and the Wolf.

Striving for perfection, the young boy would start the record over and over again, imitating the various instruments until he got it just right. With patience, persistence and practice, Herbst developed a remarkable three-octave range before ever reaching his 10th birthday.

“I knew I had something special by the time I was 10, because what I was doing really sounded unusual,” Herbst says.

Unusual? Yes. Impressive? You bet. The New Yorker is now part of a community of whistlers, helping to revive what he calls the “lost art” of whistling.

The 1930s through the 1950s was actually considered the “golden age of whistling,” says Herbst, as big bands would often feature whistlers as soloists. Did you know the legendary Bing Crosby wasn’t just a crooner, but also a top-notch whistler?

From performing with bands to coaching, Herbst has made a career of his talent. He’s performed with guitar great Les Paul, made TV and radio appearances, earned numerous awards and was even inducted into the International Whistlers Hall of Fame. Not shabby!

But before your child can dream of reaching such whistling heights, he or she will first have to master the basics.

Herbst says there are many different types of whistle techniques, including tongue and palate, finger, hand and throat. The most common, and easiest to learn, however, is the pucker whistle. So grab your little ones and get ready to rediscover the lost art of whistling.

“If you can’t make a note, keep going until you get a note and then figure out how you made that note,” he says. “Keep (whistling) until you can do it at-will, because the first time is likely to be an accident.”

From there, he adds, you can go up or down a “step” to produce different notes. Practicing with favorite songs also can help to develop those whistling chops.