'The Gilded Age to the Great War: America at the Turn of the Century' Exhibit at the Lorenzo Cultural Center in Clinton Township 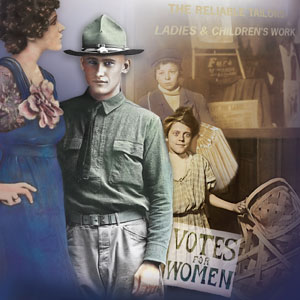 Bridge the generation gap and end the "kids just don't understand" madness with a new exhibit from the Lorenzo Cultural Center in Clinton Township. Give younger generations of Americans the opportunity to understand the past in a whole new light with The Gilded Age to the Great War: America at the Turn of the Century exhibit, running from Feb. 23-May 5, 2013. It features displays and artifacts that will shed light on society in our country as it propelled into the 20th century.

Topics like World War I, the birth of the labor union, segregation, the wealth and philanthropy of industrialists, politics, immigration, art, music and architecture will all be a part of this history-infused exhibit.

Children can also dive deeper into this time in America's past and unravel the 70-year efforts of the women's suffrage movement – and, particularly see what Michigan's role in the initiative was – through Petticoat Patriots: How Michigan Women Won the Vote, a complimentary showcasing of photos and interactive elements that will be a part of the overall exhibit experience.

Teach your youngsters about the origins of some of the many cultures currently a part of the melting pot of the United States. So I Came To America: Detroit Pre-World War I Immigrants will bring black and white photos and interview clips from the 1980s of immigrants who came to Detroit before World War I to this history-hopping adventure through time.

While browsing through the exhibit, make sure to also pay attention to the videos playing on the television screens. The Orphan Trains, Paths of Glory and World War I: The Great War are only a few of the many programs that will be playing in rotation throughout the exhibit.

Don't miss out on this free, educational opportunity! Exhibit times are as follows:

See the Metro Parent listing for more information on The Gilded Age to the Great War: America at the Turn of the Century exhibit at the Lorenzo Cultural Center in Clinton Township.

Find something funky to see this year at these weird roadside attractions in Michigan.
Read more
Travel

Are you looking to get away with your family or spouse? Check out the all-inclusive resorts in Michigan for some family fun or alone time with your significant other.
Read more
Attractions