How to Throw a Sushi Party for Kids

Make this Japanese treat for fun or family dinner with some sure-fire recipes and tricks – as well as decor ideas, ingredients, a glossary and more. 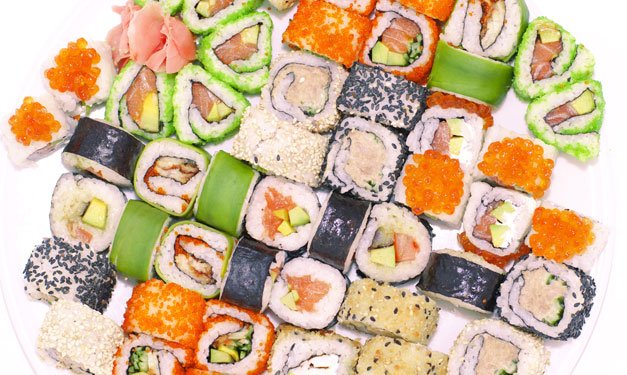 Sushi and kids. You don’t often see these two words together. Believe it or not, creating sushi can be great fun – either for a meal for your family or a kids’ party.

First, a disclaimer: Sushi does not mean “raw fish.” In fact, in Japanese, the word actually means “sticky rice.” The rest of the ingredients are really up to you and your kids. There’s no end to the list of sushi fillings – chicken, tofu, beef, cheese, eggs, all kinds of vegetables and even fruit. Sushi fillings are only limited by your imagination.

Assembling sushi is part of the fun. It’s a very hands-on endeavor kids will love. After all, what child doesn’t like playing with food? Then there’s the added fun of dipping each cute little bundle into different sauces.

Depending on the age of the kids, you can involve them in many ways, like cooking rice (see recipe, a bit below, for instructions on how children can help with fanning the rice), slicing vegetables or arranging ingredients on a platter. And assembling the sushi, of course, is a group activity.

What if you’ve never rolled seaweed in your life, or you don’t know the difference between nigiri and maki? Here’s a primer on making your next kids’ sushi party a success! And, there’s an extra recipe for “dessert” sushi that you can serve (even put candles in each one) instead of traditional cake.

How to set up for a sushi party

For a sit-down sushi dinner, consider these steps for creating a cool ambiance.

What to buy for your sushi party

The word “sushi” has nothing to do with raw fish but rather the combination of rice and vinegar that makes the rice perfect for making these rolls (the word “sashimi” actually means thinly sliced raw fish in Japanese). It is this “sticky rice” recipe that is essential for making successful sushi.

Wash the rice several times in cold water. Move the washed rice to a colander and drain for one hour. Place the rice in a heavy pot or electric rice cooker and add water. Place a tight-fitting lid on the pot and bring to a boil. Lower heat to a simmer allowing the rice to steam for 15 minutes more (do not take the cover off). Remove from heat, remove lid and stretch a clean tea towel over the top of the pot and replace the cover. Allow it to steam without heat for another 15 minutes. Set aside.

In a small saucepan, mix the rice vinegar, sugar and salt together in a small saucepan. Heat mixture on medium heat until sugar dissolves. Set aside to cool to room temperature. After rice has steamed, take a wooden spatula or spoon (do not use metal; it will react with the vinegar and leave an off-taste) and cut and fold the rice (do not use a beating or stirring motion, since this smashes the rice).

Dampen a cloth using the pre-made tezu and rub the insides of a wooden bowl. Put the hot rice into the bowl and quickly add the rice vinegar/sugar/salt solution that has been cooling. Mix with the same cutting/folding motion. After mixing, fan the hot rice mixture (using a newspaper or magazine is good) to remove moisture and cool it evenly.

One fun thing for the kids to do is to fan the rice themselves using paper Japanese fans you can buy at dollar stores. Be prepared for giggles and make sure you have your camera ready!

Do this for 10 minutes. The rice grains should have a sheen and slightly chewy consistency with just a touch of stickiness. DO NOT REFRIGERATE the rice; keep it at room temperature and use it within an hour after preparing. Keep the rice covered until you are ready to make your sushi.

Try this recipe for sushi made rolled with seaweed before your party to get the hang of it. Serves 4.

Have a small bowl of water ready in your preparation area for moistening your fingers so the rice does not stick to them. Cut nori sheet in half and place it on bamboo mat, shiny side down. Dampen your fingers in water. Spread a thin layer of rice (about 1/4 inch thick) on the sheet of nori, leaving about an inch of space around the sides. Do not pack the rice – and don’t use too much rice. Lay crabmeat, avocado and cucumber lengthwise. Sprinkle with sesame seeds.

To roll: Slowly fold the end of the mat closest to you over the filling and tuck it in. Try not to squeeze too hard, or all the contents will fall out. Use medium pressure to create a compact tube. Remove the mat from around the roll, press in the loose ends and place it on a cutting board, seam-side down. Using a wet, sharp knife, slice the roll in half then into six equal pieces. Serve with soy sauce, wasabi, and pickled ginger.

NOTE: To make inside-out rolls, after spreading the rice on the nori, sprinkle with poppy or roasted sesame seeds. Cover with a sheet of plastic wrap on top. Lifting with the bottom plastic wrap, turn over the nori/rice sheet onto the bamboo rolling mat. Remove top plastic wrap and proceed with instructions, as above.)

This is probably the easiest sushi to make. It’s simply made with pressed rice and fish on top. No rolling involved! Just press the rice into a neat oval, top it with thinly sliced fish, chicken or beef, and maybe add a sliver of seaweed for garnish (or to tie it together).

Shape rice into neat ovals (about an inch long and 1/2 inch wide). Use wasabi paste straight from the jar. Dab small amount onto rice ovals then top with seafood, meat or vegetable. If desired, wrap a thin strip of nori around each oval to garnish. Serve with wasabi, soy sauce, and pickled ginger.

Shh: The only sticky rice here is made with rice cereal and marshmallows. Make this only when you’re certain no master sushi chef is around to correct you when you call it sushi!

Starting at one side an inch up from the edge, place gummy worms atop the mixture end to end in a horizontal line. Gently roll the lower edge of the marshmallow mixture over the gummy worms. Then stop and cut the log away from the rest of the mixture. Use the same method to form four more logs. Slice each log into 1-inch-thick “sushi” rolls and wrap them individually with a strip of fruit leather. Makes 4 to 5 dozen.

Learn how to create dessert sushi out of Peeps, too!