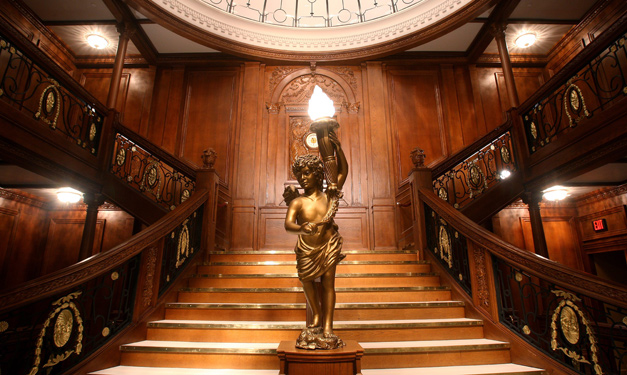 It’s been 100 years since the Titanic sank on April 15, 1912. For modern families, that’s ancient history. But now, the stories of the adults and kids who were aboard the ill-fated ship are coming to life in Titanic: The Artifact Exhibition.

More than 300 recovered artifacts from the giant boat – including 250 never-before-seen in Michigan – are on display at Dearborn’s Henry Ford Museum from March 31, 2012 to Sept. 30, 2012, commemorating the 100th anniversary of Titanic’s maiden, and final, voyage.

Take a peek inside the exhibit in the Metro Parent “On the Scene” video!

On that trip, 1,500 people lost their lives when the ship hit an iceberg in the Atlantic Ocean. This exhibit is a result of about seven expeditions under the water and into the wreckage to retrieve artifacts that document the legendary vessel.

These items also help to tell the passenger’s stories. The exhibit even features tales about passengers with ties to Michigan, according to The Henry Ford’s website.

The exhibition highlights the history of the ship’s construction, launch and voyage, as well as sinking and rescue. Visitors also can walk through recreations of some of the ship’s extravagant rooms, including a full-scale replica of the famous Grand Staircase – perfect for a photo opportunity! Everything from china plates and clothes to children’s toys will be on display.

The bottom of the ocean is full of bacteria, microbes, salt and more that were eating away at the Titanic’s contents for nearly a century. To show the importance of retrieving the items from the ship, visitors also learn about the preservation of artifacts and the efforts to keep the ship’s history pristine.

Immerse yourself in the deep history of one of the most famous ships of the last century. The exhibit is a special ticket price and is not included with regular museum admission. Here is the ticket info: Special timed tickets for members are $10. Non-member ticket prices include admission to the museum and are $27 for adults (ages 13-61), $22.50 for youth (ages 5-12) and $25 for seniors (ages 62-plus). Children ages 4 and under are free.

Check out Metro Parent’s listing for this event to get more information on Titanic: The Artifact Exhibition at the Henry Ford Museum in Dearborn in 2012.