Titanic: The Musical at Stagecrafters in Royal Oak 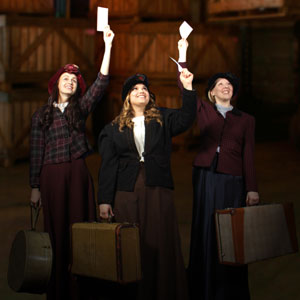 The Baldwin Theater transforms into a luxury ocean liner April 13-May 6, 2012 as Stagecrafters present Titanic: The Musical. This stage show, brought to life by 49 local actors, commemorates the 100th anniversary year of the storied ship's disastrous sinking.

Here, you won't find Jack and Rose of the James Cameron Titanic flick (which has returned to movie theaters in 3D form this month). Rather, this show humanizes the tragedy through a series of vignettes depicting different people from all three classes on the ship. Featured passengers include a couple in first class, another from second, and three Irish girls in third class.

The original Broadway production – written by Peter Stone, with music and lyrics by Muary Yeston – opened in April 1997 and ran for more than 800 performances before closing in March 1999.

This non-profit Royal Oak theater group – now in its 55th season – resurrects the play for a series of weekend productions, plus two Thursday evening presentations. (Incidentally, the line-up includes shows on the actual dates that the RMS Titanic sank – that was April 14 and 15, of the year 1912.)

The curtain goes up on the following times:

The show is appropriate for ages 8 and older. Tickets for the show range $18-$20 and can be purchased online or by phone.

Before the 14 shows kick off, Stagecrafters hosts a fundraiser – Titanic Dining Experience – on Thursday, April 12. While the main event has sold out, "Third Class" tickets are still available for $30 each and include a presentation by Titanic historian Ron Bartsch and a chance to see the show's final dress rehearsal.

See the Metro Parent listing for more information on Titanic: The Musical at Stagecrafters Baldwin Theatre.