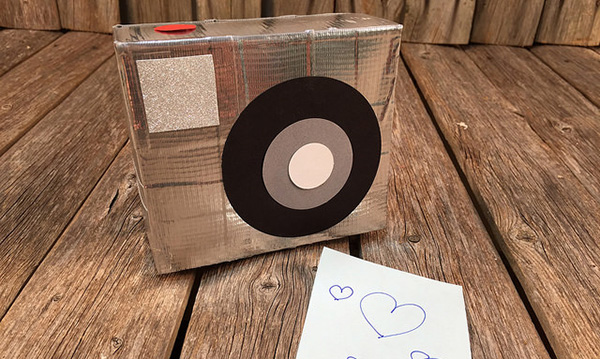 Two weeks ago I found myself with my nephews running all over the Ann Arbor Hands-On Museum trying to capture as many photos as possible of the fun we had. It was tough! Whenever I paused to look at a photo of my nephews on my phone, the two of them were quickly asking to see what I had snapped. I wished at that time that the two of them had their own cameras to capture their own perspectives.

While I wouldn’t give them the most expensive cameras to run around with, I would give them a play camera, paired with a scribble pad on the back, to document their favorite moments from the day to act as photos. Here’s how your child can make his or her own easy DIY craft – an upcycled play camera, which is perfect for your next family outing.

Start out by stuffing the empty box with Poly-Fil batting so that the box is full but not bulging. Close the other end of the box.

Add duct tape to the front and back of the box. Use your scissors to trim the excess tape.

To create the shutter release, punch a small circle of red card stock and attach to the top of the camera with double-sided tape.