Walking with Dinosaurs at The Palace of Auburn Hills 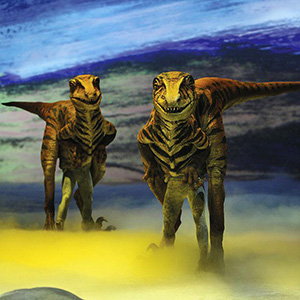 Has your child ever dreamed of meeting the mighty T. rex? Well, now she can – when the Walking with Dinosaurs: The Arena Spectacular makes a stop at The Palace of Auburn Hills Aug. 6-10, 2014.

Based on the award-winning BBC television series created by Tim Haines, Walking with Dinosaurs: The Arena Spectacular will take the audience back to the Triassic, Jurassic and Cretaceous periods to learn about some of the dinosaurs that lived during those times.

The show will feature 10 species of the most well known dinosaurs that ever lived, including the Stegosaurus, Brachiosaurus, Utahraptor and, of course, the Tyrannosaurus rex.

The dinosaurs were "hatched" by Sonny Tilders, the head of creature design at Creature Technology Company. The Brachiosaurus is the largest of the dinos, standing at 36 feet tall and 56 feet long. Each larger dinosaur is controlled by "voodoo rigs" that will allow it maneuver in the arena, while a suited puppeteer specialist will operate the five smaller ones from the inside.

The show has been seen by more than 8 million people in 243 cities worldwide.

Show times for the eight-performance engagement are as follows:

See the Metro Parent listing for more on Walking with Dinosaurs: The Arena Spectacular at the Palace of Auburn Hills.

Summer rite of passage or a scary proposition? For many parents, including this local mom, it's a toss up. Read on for the pros, cons and many perspectives.
Read more
Travel