Benefits of Watching Television as a Family

Yes, there actually are benefits of watching television as a family. Here's how tuning in to educational TV shows for kids can pay off for your family. 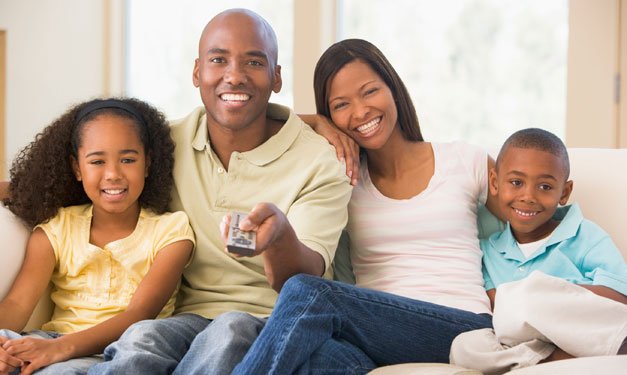 Whether your kids watch programs on traditional TVs, tablets or a computer, there should be a cap on screen-time. But that doesn’t mean that all TV is all bad. There can be some benefits of watching television – especially if done as a family.

Tuning in to educational TV shows for kids can give your kids an up-close and personal peek into the lives of sharks. Or encourage them to use math to solve everyday problems.

You might even learn more about your child’s opinions on different situations, at home and at school – if you watch with them.

But how do you tap into the power of TV as a learning tool? The key is to be proactive about what you watch with your kids and to make it more of an interactive experience. Here’s how you can help make TV a learning opportunity for your kids.

“TV programs are like meals on a restaurant menu – some are healthier than others,” explains Beth A. Richman, Ed.M., a specialist in the field of children’s media who has worked with both Scholastic Media and PBS in developing education shows for children. “Parents are the gatekeepers.”

She suggests parents get an idea about the content of a show before they allow kids to watch it, whether the parent is tuning in with the child or not.

Often, you can go to the broadcaster’s website to read a rundown of what the show’s about. For example, PBS.com includes a section for parents that goes over Sesame Street‘s general focus and even provides activities and episode write-ups.

For more detailed reviews about the contents, Richman says you can read about what other parents are saying on blogs or even ask friends. Commonsensemedia.org also provides a grade scale for shows, so you can easily figure out what age is right for which program.

“If kids sit in front of a TV, it becomes a passive activity,” says Lynn C. Smitherman, M.D., a pediatrician at the Children’s Hospital of Michigan in Detroit.

To create a learning experience, TV needs to be interactive, Smitherman advises. “If they’re talking about the letter ‘e’ on Sesame Street, you might have your child point out all the letter ‘e’s’ he or she can see in the room.”

By reinforcing what the child sees on the TV and drawing connections beyond the screen, a child begins to understand learning is an active process.

Talking with your child and watching shows together will help encourage interactive viewing. You can keep the conversation simple, like asking about what’s happening in the show or delve into deeper issues, like questioning whether a character’s actions are good or bad.

Smitherman still recalls watching shows like Disney’s Lizzie McGuire and That’s So Raven with her two girls when they were growing up (they’re now grown).

If the characters did questionable things on the screen, she’d ask her daughters about it.

“When something was really off the mark, as soon as a commercial would come on I’d ask them about it,” recalls Smitherman. “It’s important to talk about your values with your kids, and TV shows can be one way to start that conversation.”

“Today’s children are spending an average of seven hours a day on entertainment media, including televisions, computers, phones and other electronic devices,” according to the American Academy of Pediatrics.

Whew, that’s a lot of screen time! In fact, your kids might not even realize how much time they’re spending in front of a screen. Talk with your children about concerns you have about them watching too much TV. Decide on a certain amount of screen time your kids will be allowed each day.

But you might also consider limiting what kind of TV they’re watching. Smitherman points out that even if children are interested in watching the news, it might not be appropriate for them.

Another example is if the characters in the show are constantly exhibiting behavior that you don’t find appropriate, it might be time to make a change.

Even if a show is supposedly for ages “4 and above,” that doesn’t necessarily mean it’s a good fit for your child. Richman says you should think about your child’s interests and needs when selecting shows.

If your child can’t get enough of zoo animals, maybe tune in to Animal Planet. For wannabe scientists, a show like Discovery Channel’s MythBusters or even Disney’s Lab Rats might appeal.

During commercials, mute the TV and talk about what’s going on in the show. Or, if you’re watching a recorded show, stop the DVR during the commercial break to have a brief discussion.

Institute a family movie night, maybe every Friday. As part of “movie night,” plan on spending time discussing the movie with your kids afterwards.

“The DVR is your friend,” says Richman. Develop a library of pre-recorded shows that your children know are parent-approved.