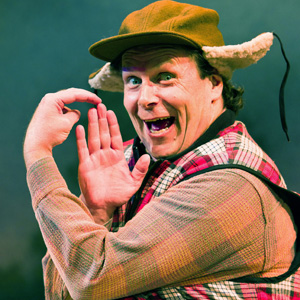 "From lumberjacks to lug nuts," learn all about the Mitten State's colorful story – with a trivia-savvy "tour guide" sporting some serious flannel!

Families can enjoy an interactive adventure through Michigan's history with an all-new, original performance called Wolverine Will, at Performance Network Theatre in Ann Arbor at 1 p.m. Saturday, May 19, 2012.

Wolverine Will is part of the Children's Theatre Network Saturday Series for Young adults, which aims to provide a diverse and cultural education for students in grades K-6.

In this new offering, audience members are introduced to a lumberjack by the name of Wolverine Will – who takes them time traveling through Michigan's history. This exciting enterprise includes stops at a lumberjack camp, a Native American village, the city of Lansing and even Detroit during the height of the auto industry.

This show is very interactive, with Wolverine Will talking directly to the kids – as well as getting them involved in the program.

Wolverine Will was written by playwright Performance Network Theatre director Carla Milarch, who consulted a first grade teacher for the performance. The result? The show is specifically designed to supplement children's education – and maintains the "Pure Michigan" theme. This will be its very first production.

Wolverine Will is only 40 minutes long, so there isn't much need to worry about children getting antsy during the performance.

Formed in 1981, the Performance Network Theatre is the only professional theater in Ann Arbor. Its season runs year-round with a variety of shows, from musicals and dramas to Pulitzer- and Tony-award-winning productions.

Tickets are $10 for adults and $7 for those ages 16 and under, and can be purchased in advance via the theater's website.

See the Metro Parent listing for more on the Ann Arbor production of Wolverine Will.