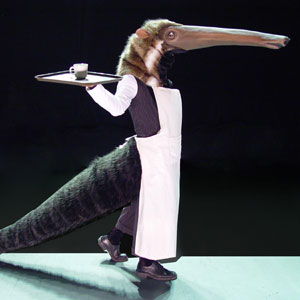 Have you ever seen penguins play musical chairs? What would you do if a penguin stole your seat?

Yes, these things may seem strange. But when the ZooZoo stage show comes to Music Hall in Detroit, those are just a couple of the animal antics that you'll see unfold before your very eyes. Presented by Portland, Oregon-based Imago Theatre, this show combines mime, music, dance and audience participation.

Imago Theatre was founded in 1979 and has been touring with its original productions in the United States, Asia, Canada and Europe. Their popular shows encourage audience participation – which is perfect for families. The animals make their way into the audience (and yes, a penguin just might steal your chair).

The actors on stage mix acrobatics, performance art and wacky costumes for this totally original show, which is set to music. You'll see hippos with insomnia, conniving penguins and cuddling polar bears, plus anteaters, frogs, rabbits and more. Their shenanigans will unfold live on stage. There are group and solo performances during the show, too. But we won't give too much away – see the show for yourself!

While we love a recreation of a classic book or stage production, it's always cool to introduce the kids to something unique. And we'd say this show is one of the most offbeat creations we've seen come along in a while.

See the Metro Parent listing for more on the ZooZoo stage at Music Hall in Detroit.