How to Reclaim Family Weekend Fun and Together Time 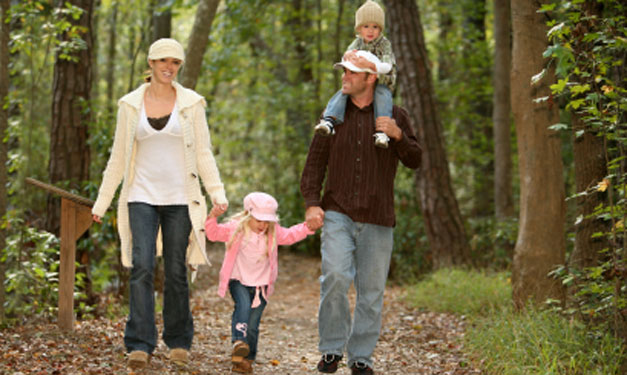 Long ago – maybe a generation or two – clocking out on Friday was the equivalent of pressing a reset button. Weekends, like the lost “family viewing hour,” were a sort of sacred idle time, filled with storied stuff like Sunday picnics, big dinners at grandma’s and maybe even a “drive in the country.”

Of course, odds are, this sounds a bit more like it: “Our weekends are a lot of things bottled up in two days.” That’s how Lorri Melis, a working mom of three in Macomb Township, sums it up. “It’s ‘family time,’ it’s doing homework, studying for tests, going to church. It’s filling it all in.”

Yet reclaiming even that small slice of your family’s Saturday or Sunday can give everyone some juice for the week ahead. Try these ideas on for size.

Carving out time is tricky. But in the Melis home, a three-hour escape is a must – especially when dad’s was taking him out-of-state up to four days a week.

“I’m the one rallying up the troops,” Lorri Melis says. It can be a tough sell. Andre would be worn out from traveling. And sometimes the kids are just ready to veg after a long week of school, dance classes and hockey practices.

“I have a lot of energy,” admits Melis, who reasons, “We have to do this for our family. We can sleep tonight.” Whether it’s a dinner out, movie or shopping as a gang, “The kids look forward to having some time with all of us. It’s like a break – a little down-time.”

Over in Madison Heights, Karey Hansen’s family has relished a ritual starting at 10 a.m. Sundays. Following a morning coffee, she and her husband would gather up their young kids for a jaunt to the Royal Oak Flea Market.

It stemmed from a pre-kids pastime the couple enjoyed. The trove of booths and inexpensive treasures translated well to their little ones.

“It’s quiet time, in a lot of ways,” says Hansen. “You don’t have to talk a lot or say a lot, but you’re together; you’re experiencing a Sunday morning.”

And another perk: “There’s something for everything,” Hansen says. She loves old jewelry, while dad hunts for vintage lighting. Clara would often grab a cup of jellybeans and trinkets from vendors who know her while Sam took in the scenery.

It’s a better bet than an activity strictly “for the kids.”

“If mom and dad are both miserable,” says Hansen, who’s also a local school psychologist, “everybody’s not being recharged.” Same applies to their “louder” trips. They’ve loved visiting places like the Michigan Science Center, which is home to lots of hands-on bells and whistles that are a blast for all ages to explore.

These sorts of museums definitely offer cross-generational appeal – not to mention treats for various tastes. Just ask Pamela Rhoades Todd, who’s been involved with the Detroit Museum Adventure Pass Program. Now an online program, the passes are available for printout and let families of two to four explore nearly 30 cultural hotspots, admission-free or at a reduced rate.

A mom of three “very rambunctious” boys, Todd’s put hers to good use, tailoring monthly trips. That’s been key, since there’s a five-year age gap between her oldest and middle kids. “He’s (been) pleasantly surprised with how much fun he’s having,” Todd says of her eldest, Jordan.

Whether that’s watching a real assembly line at Dearborn’s Ford Rouge Factory or glimpsing history in Detroit, where the family lives, everyone’s engaged.

“It definitely reinvigorates us,” she says – and brings them closer. “Because it allows us to be together and talk away from the TV, and share thoughts.”

Maybe an ambling ride in the van isn’t reality. (With a backseat of bouncy kids and tight gas budgets, does it really sound that great?)

Instead, try a shorter scenic route: “Pack up and go for a hike,” suggests Denise Semion, chief communications officer for the 13 local Huron-Clinton Metroparks. “That’s your easiest, most economical winter retreat.”

Entry is $5 a car. And the trails, most regularly cleared of ice and snow, offer fresh angles, from critter tracks to chickadee chirps. “You’re seeing a whole new scene of colors, sights and sounds that help reawaken your senses,” Semion says.

It’s also a chance to try something new together. Like sledding or ice fishing. Or even cross-country ski rental, available at select Metroparks for an added fee.

Personally, Leslie says, the activity has helped push her limits and buck barriers – “like the fear of turning upside-down.” Now, “I love being able to share it with Hannah. I like that it helps her grow and learn and heal, too.”

And share plenty of smiles in the process – whether at practice or closer to home, where they also bike, jump rope and even hula-hoop.

That can help set the tone for family time. Or become it. Leslie recalls cozying up with her daughter to read independently. “It was cool. We could just share in that space.” Hannah enjoyed it, as well: “It made me feel happy. What I liked about it was that I was with her – and I was reading a really good book.”

Seize the power of spontaneity, too. Karey Hansen’s family has relatives that live close by. A random, “what are you up to?” phone call can quickly turn into an impromptu, order-a-pizza-style gathering at someone’s house.

“Those are always the most fulfilling,” she says. “It’s not this big party or holiday.” It’s not a major production over at the Melis house, either.

In fact, one of the family’s favorite hangouts is the Mall at Partridge Creek in Clinton Township, not far from home. They’ll snag a Friday-night discount flick at the MJR. Or they’ll stroll past the big faux fireplace, grab ice cream and meet other shoppers’ dogs at this pet-friendly spot.

“It just gives us an opportunity to be together as a family,” Lorri Melis says. “You can get through another week, seeing how happy and excited they are.”

And she hopes it’s a lesson her kids will carry with them and pass on.

Allow moments to sneak up on you, too. Like they do when the Hansens leaf through books and magazines together at the dinner table – another little tradition.

Inevitably, tidbits come out. Someone might be chatting about a sale in a circular one minute; the next, Clara might share something about her school day.

“I find that if you’re not trying really hard to have a conversation, they come more naturally,” says Hansen.

At Kensington Metropark, Semion once saw a parent and two children sitting on a rock, transfixed by sandhill cranes just yards away. “Those kids were as still as statutes,” she recalls. “Not only does it give you a chance to connect and recharge, but you’re making memories.

“They’re going to remember that more than perhaps a video game they played.”

And, a few years back, it hit the Todd family on a deeper level, too, at the Heifer Global Village Experience. Part of the Howell Nature Center, this exhibit gives a glimpse of poverty in other countries. The experience resonated with her son Justin – who afterwards, in the car, told his mom how thankful he was to live in the United States.

“It let me know he really does appreciate the things he has, and he has compassion,” Pamela Rhoades Todd says. “That really touched my heart. Those are the kind of children I want to raise.”