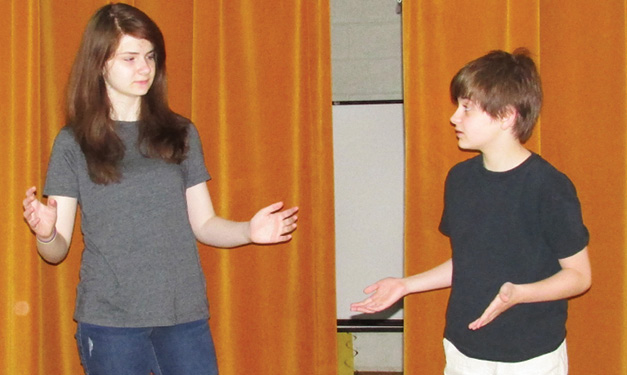 Calling southeast Michigan kids! Got a bent for the dramatic? Want to pull some strings behind the scenes? How about an opportunity to bring your imagination to life in front of a live audience – or just in front of a group of other fun kids?

That's the driving force behind the Acting Out Kids Community Theater (A-OK Community Theater). Founded in spring of 2014, it's the brainchild of two children: Clawson siblings Madison Siwak, 13, and Max Siwak, 10. These local kids were looking to get more involved in acting in their community and encouraging other youth to engage in stage fun, as well.

Open to ages 9 to 18, their group is a place to brush off the pressure of the school and start gaining skills and self-confidence by performing in front of their peers.

The kids' mom, Nicole Siwak, says the two teamed up with Clawson mayor Penny Luebs to create the theater. And they have an overreaching mission.

"Through acting and improvisation," Nicole Siwak explains, "kids will learn real life skills such as public speaking, social interaction, taking initiative, expressing ideas, being creative and working together as a team."

And, she adds, "We decided to create this group so it would be something more fun and less stressful on kids – and not something super serious."

A-OK meets every other Friday evening (7-9 p.m.). The gatherings include refreshments and activities, like open mic night, and games led by both Madison and Max – all geared at inspiring kids to jump in the fun. There are special guest teachers and local acting professionals invited to lead some of the events and workshops, too.

Both sister and brother love their mission. "My favorite part is interacting with the other kids and teaching them different skills to help bring them out of their shell," says Madison. And, Max adds, "I think it's a lot of fun and a great way for you to get to know other kids."

Although hosted in Clawson, you don't need to be a Clawson resident to participate. "It is open to anyone who wants to be in it," mom says, "and our goal is to get kids from the community to perform on a more regular basis."

Parents are required to stop in and register their child before they can join in the group's activities, including a $2 door charge for each drop-in event. Actual stage shows are underway, too, including an early September 2014 performance (production kicks off in July); there's an additional $45 fee to participate.