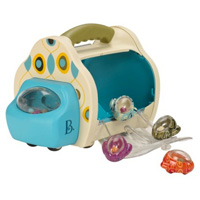 Bright colors, rattling noises and cars galore. Nope: We're not talking rush hour on I-696. Rather, these are the cool (and far less-stressful!) features of the B. Car Go Cargo Truck Track. One of the winners of Dr. Toy's 100 Best Children's Products Awards in 2011, this three-in-one toy is sure to win over even the pickiest child.

It's the brainchild of B. Toys, a company that prides itself in producing toys that inspire individuality. Its playthings are based on everything from traveling to inanimate objects – like a bar of soap. That creativity just might explain the toy racecars in Go Cargo, which look more like something out of The Jetsons than NASCAR.

These futuristic rides easily store inside of the truck carrying case, which also doubles as a figure-eight racetrack – where the real fun begins. Simply unfold both sides of the truck to reveal the track.

Kids ages 18 months to 4 years old can speed around this little track with one of four pod-shaped cars. The cars, along with the truck's windshield have a bubble top with rattling beads inside – stimulating your child's senses with a combo of sound and motion.

To boot, for every B. Toy product you buy, 10 cents is given to Free the Children, the largest network of kids helping kids through educational programs in 45 countries.

Purchase yours online at Target.com for $24.99.

From candlemaking to ceramics, these spots will keep the kids busy and creative.
Read more
You