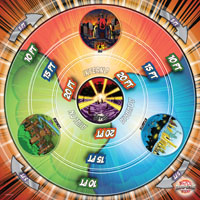 When Silly Bandz hit store shelves, kids couldn’t get enough. Those collectible, colorful and cute silicone bracelets were popular with young girls everywhere. And while boys did wear some of the more "guy friendly" styles, the bracelets weren’t really geared toward them.

Well, we spotted a new elastic band made just for the boys, called Battle Bands. They’re perfect for ages 6 and up – and, with 70 different bands in a variety of shapes, kids will have tons of fun collecting and trading them.

Each band is accompanied by a Warrior Card, which features the name of the band, a rating of its strength level – 5 to 50 – and a little background on the band.

Here’s the coolest part: The bands aren’t just for trading and collecting. Kids also can play games with them. Each has its own power and comes in different categories including earth and fire. Play against your friends with the use of the Battle Board.

According to Senario, the maker of Battle Bands, "each player takes turns launching their bands at the battle mat. The winner of each battle is based on where the bands land, as well as the band’s individual ‘strength,’ which gives it a particular advantage."

There are three packs to choose from:

What we like about these bands is that they are designed for the boys – a nice balance to the Silly Bandz craze. They’re simple and call for a bit of creative play. Plus they’re pretty cheap.

Try them out and let us know what you think!

Whether you want to go back to work, go part-time or want more flexibility, now is the time to take advantage of the changing workforce.
Read more
Sponsored Content