Bring It On: The Musical at Fox Theatre in Detroit 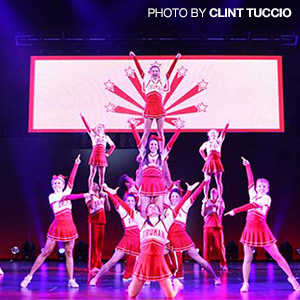 Step inside the world of competitive cheerleading when Bring It On: The Musical hits the stage at the Fox Theatre in Detroit for three shows on April 5 and 6, 2014.

This musical comedy is inspired by the 2000 flick Bring It On, which gave the audience a hilarious look at the craziness of cheer competitions – and the lives of a few sassy high school cheerleaders from different schools – and put "spirit fingers" on the map.

This spin on the movie features dance and aerial stunts and a "colorful crew of characters," according to the show's website, plus an original story by Tony Award-winner Jeff Whitty (known for Avenue Q).

Whether you're familiar with the original flick or not, this show is sure to keep you entertained with spectacular dance sequences, cool stunts and more.

Want to catch the show with your kids? There are three shows to choose from. Times are as follows:

Tickets for the show are still available, and they range from $30 to $70.

For the directions and the basic details on Bring It On: The Musical at the Fox Theatre in Detroit, check out the Metro Parent listing.