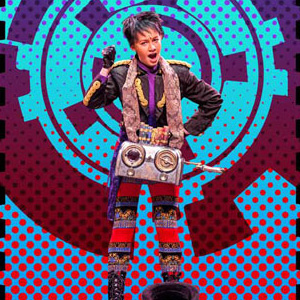 It's a light and playful children's opera – originally set against the backdrop of the horrific Holocaust in Europe. And today, its theme of good triumphing over evil holds as strong as ever.

Brundibar is heading back to the Detroit Opera House stage for one performance only at 2:30 p.m. on Sunday, March 16, 2014. Featuring the talented young voices of the Michigan Opera Theatre Children's Chorus, this family-friendly opera tells the tale of a brother and sister who team up with a sparrow, cat and dog to outwit an evil organ grinder named Brundibar (Czech for "bumblebee"). But the show is just one of three attractions in this very special hour-long presentation.

It begins with important historical context. In a short "playlet" called Lilies Among the Thorns, kids discover the history of Brundibar's first performances – by Jewish children interned at Theresienstadt, a notorious Nazi concentration camp. Poetry, song and visual art bring the story to life, as audiences learn how the original 55 performances of Brundibar sprung up, against all odds, in a very dire setting.

Next is a once-in-a-life treat: Holocaust survivor Ela Weissberger, who, at 13, played the lead role of Cat in the original Brundibar, takes the stage, sharing her memories of "how art and music helped her survive," the DOH website says. She'll also speak of the dear friends she made – many of whom, sadly, did not live.

Then, experience the 1943 opera before your eyes. Siblings Pepicek and Aninku set out to find some milk to save their mom, who is very ill. They sing to raise money – but are thwarted by mean old Brundibar. That is, until they find some very good friends. This version features the original small-orchestra score with a wordplay-filled English translation by Tony-winning playwright Tony Kushner.

Be sure to stick around after for a meet-and-greet with Weissberger and the cast.

To find the basic details about the March 2014 production of Brundibar by the Michigan Opera Theatre's Children's Chorus at the Detroit Opera House, visit the Metro Parent calendar listing.