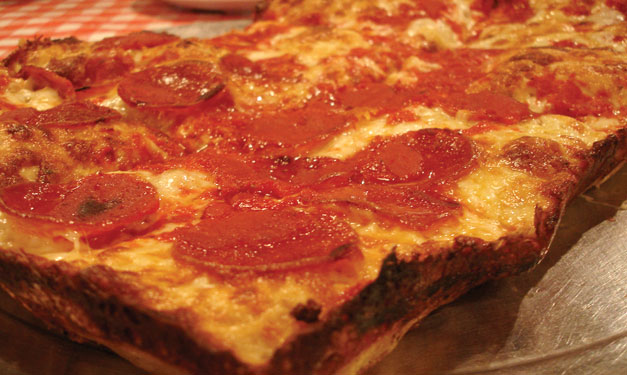 In my childhood, going out for pizza was a treat. Even though pizza itself wasn't an exotic food, when we went out to get it, that usually meant we were going to Cloverleaf Bar & Restaurant. For the longest time, I was convinced the only items on Cloverleaf's menu were pizza and salad. My dad would order for the table, so menus were never necessary.

Now I bring my kids to Cloverleaf and not much has changed. We rarely use the menu. It's difficult to order much outside of the wonderful pizza and salad!

About the place (and pizza)

Cloverleaf celebrated its 65th anniversary on Feb. 27, a testament to both its pizza and the family running the show. The Guerras – beginning with Gus in the 1940s to Marie and Jack in the present –have run Cloverleaf with consistency and love.

In 1944, Gus Guerra opened Buddy's Rendezvous in Detroit with his wife's uncle. At first, it was only a bar, but profits off alcohol alone could not sustain the business, "so Grandma Passalacqua told my parents they should serve food, too," says Marie. The partnership between the two men soon dissipated, so Gus sold Buddy's and the pizza recipe, moved to Eastpointe (then East Detroit) in 1953 and purchased Cloverleaf Bar.

The pizza is still prepared in the Detroit style, meaning square and deep dish modeled after Sicilian style pies. The crust is thick and dense with a crunchy crust and bottom. Some of the pizza's flavor comes from the well-seasoned pans, which undoubtedly have been used for years. Known for its thick golden crust with caramelized, crunchy corners, the pizza is a true joy to eat. It is not rare for little fights to break out between family members over who gets that last coveted corner slice.

Families are always welcome at Cloverleaf. There's even a small play area for little children to expend some energy while the pizza is being baked. Also near the play area is one of those claw machines where you can try your luck at grabbing a stuffed toy. I was never any good at those things, but if you can do it, give Cloverleaf's a shot.

The menu (beyond pizza!)

I have been waxing poetically about the pizza and will continue to do so; however, there are plenty of other menu items available.

For starters, French fried green beans are a unique take on the seemingly endless list of deep fried foodstuffs. In this case, slightly crisp green beans are battered and fried, then served with a wasabi ranch dipping sauce. I realize they're not the healthiest things ever, but my kids ate them happily and so did I.

Like most pizza places, Cloverleaf has a the requisite number of salads on the menu, but – and this is a big but – they have one of metro Detroit's best salads on the menu, too. Cloverleaf's famous antipasto salad is a sight to behold. Crunchy iceberg is tossed with provolone and mozzarella cheese, salami, ham, green and black olives, chick peas, pepperoncini, cucumbers, tomatoes – and all dressed with a piquant house-made Italian dressing. There's nothing fancy about this salad, but the flavors work perfectly together and appeal to picky eaters, too. If you don't like a particular item, pick it out and someone else at the table will eat it.

There's even a wonderful house-made cheesecake to finish off your meal. To be honest, cheesecake is a little misleading because when you mention cheesecake you think heavy and rich. Whipped cheesecake is the opposite – it's light and airy. Perfect for sharing with the kids; they'll think they're eating a whipped cream pie.

Each child also has the option of becoming a "little chef," and making their own pizza. Kids aren't whipping up the famous Detroit style square pizza; rather they create a round pizza with Cloverleaf's signature sauce, cheese and whatever topping they'd like. Each child is given a toque (chef's hat), a certificate and a photo. Oh – and, of course, they are able to eat their delicious creation.

During the week at lunchtime, from 11 a.m. to 2 p.m., an amazing buffet is available. For just $6.75 per adult and $4.99 per child, you get all-you-can-eat pizza, pasta, salad, dessert and whatever else might be served that day. It's a great opportunity to become familiar with items outside of the usual pizza and salad – but you get pizza and salad, too! Also, my kids love building their own plates, so not only is it a great value, but they have a great time, too.

From the welcoming decor to the menu, Cloverleaf is determined to make every family who visits feel welcome. If you've never been to Cloverleaf, make the drive to Eastpointe. Once you bite into a glorious corner slice of pizza, there's no turning back. I can almost guarantee your first visit will not be your last.

In March, metro Detroit's trees are packed with the sugary sap needed to make maple syrup. Learn about the process at these 2022 maple sugaring events.
Read more
Macomb County Activities