Disney's Beauty and the Beast at Fisher Theatre in Detroit 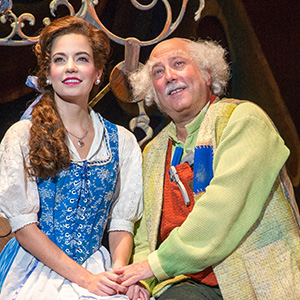 It's not every day you get to be a guest at dinner with Belle, Lumiere and the gang – or get to witness a "tale as old as time" happen right before your eyes.

But now is your chance! March 25-30, 2014, southeast Michigan families are invited to be enchanted by the love story and whimsical characters of Disney's Beauty and the Beast, live on stage at the Fisher Theatre in Detroit.

Beast lives up in a castle – but he's not really a beast. He's a prince who was cursed and because of it, is to be trapped in the ugly body of a creature until he can learn to love – and be loved, too. With all of the castle's servants trapped in the curse, too, living as dishes and furniture, it's important Beast break the spell before they're trapped for eternity. Belle, a smart and beautiful young woman from the small town, crosses paths with Beast. Will she be the one to break the curse?

The team that created the Broadway production of Beauty and the Beast brings the show right here to Detroit as part of a tour. Costume design is by the designer who won a Tony for her work on the show's outfits. Fans of the film will definitely recognize some of the Academy Award-winning music, too, with some additional new songs thrown in the mix.

Tickets range from $39-$99. The show is not recommended for kids 5 and younger. Babes in arms will not be allowed.

Dates and times for the performances are as follows:

Still want more information on Disney's Beauty and the Beast at the Fisher Theatre in Detroit? Be sure to visit the Metro Parent listing, where you can find details and a link to the Fisher's webpage.