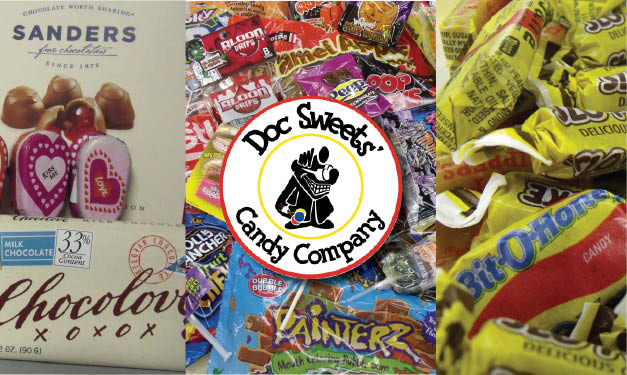 It's no surprise that kids linger over the "thousands and thousands" of treats at Doc Sweets' Candy Company in Clawson. After all, the 5,000-square-foot shop – which claims to be the biggest retail candy store in Michigan – has an entire wall of Jelly Belly varieties (72 total, at latest count), every Now and Later flavor possible, and rows and rows of classic candies.

But David Sklena, owner of Doc Sweets', says you'll often find parents are meandering through the store even longer than their children.

"It reminds them of when they were kids," he says. "They see all these old candies that they used to love."

These goodies can be tough to resist for parents who stop in to purchase some treats for their children, says Kat Beauchamp. She originally worked at the shop as a cashier and, after becoming a mom, is now a devoted shopper.

Sklena says the customer base ranges from the littlest ones, who have big eyes for the huge lollipops, to regulars well into their 90s. It's become a hot spot for scout trips for kids, and senior citizens often board a bus to visit, too.

Not surprising when you consider its wide array of retro picks, from Big League Chew, Runts and Bubble Tape from the '80s to '50s faves like Bazooka Bubble Gum, Necco Wafers and Charleston Chews – even early 1900s throwbacks.

Customers from more than 100 miles have swung by to check out the exotic selection of flavored crickets and strawberry-flavored suckers with a real scorpion inside. But Sklena is proud that it's become a beloved neighborhood destination.

One of Doc Sweets' regulars is Clawson mayor Penny Luebs, Sklena says, who's been known to bring company. Many locals have declared their support for the store, which opened in 2008, as an integral part of the Clawson community.

"It's really great to have such support from everyone," says Beauchamp.

Some of the store's most unusual supporters have been dentists, Sklena says. Local offices have referred the kids with the best dental checkups to the shop. It helps that the store has a large selection of sugar-free candies.

It's become a destination for brides and grooms, too, as candy bars are gaining popularity at weddings.

David Sklena has been very happy with the success of his business. He says shoppers continually ask for different types of candies, chocolates and treats, and the shop is constantly expanding its selection to keep up with demand.

In fact, the store maintains a log of different requests customers make. Sklena is constantly hunting down memories – and spotting new ones, at places like Chicago's Sweets & Snacks Expo, which is an annual journey for Doc Sweets'. In recent years, for instance, they've beefed up on sour-type candies, which are hot tickets.

Holidays bring fresh fun – with Valentine's Day being one of the busiest times. "People don't want to wait" for their favorite goodies, Sklena says – so they swing by the Doc for their fix. Around Easter, plenty of "bunnies" hop in to fill up baskets.

For rug rats, evergreen hits include make-your-own-candy necklace kits – now including uber-popular LEGO candies – and, of course, those flavored crickets and chocolate-covered scorpions. "Everybody likes looking at them," Sklena says. "My nieces are probably the ones I think get the biggest kick out of them!"

Many parents visit, too, to find treats as a sweet "reward system" for milestones like potty training or a good report card. Family-friendly events are on tap for the future, too, Sklena says.

Really, at Doc Sweets', the visitors are as varied as the treats.

"Lot of families, lot of singles – everybody likes candy," Sklena says. And they have another big thing in common: "They're all happy when they come in, and they're happy when they leave."