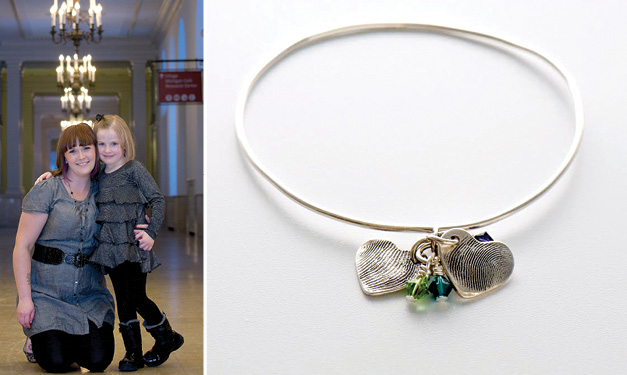 A Garden City girl's battle with cancer inspired her mom to make a memorial keepsake. Five years later, Carrie Stanley's only daughter is thriving – as is her unique jewelry business, recently rebranded as Elle Bird Studios.

Stanley's world was shaken in 2009 when Leiryn, then 18 months, was diagnosed with neuroblastoma – a malignant cancer. A year later, doctors had done all they could; Leiryn had just months to live. Devastated but determined, Stanley set out to create something as special as her daughter to keep her memory alive.

"I had a girlfriend in high school whose grandfather passed away, (and) she had this really cool charm for him," Stanley recalls. "That is how we wanted to remember (Leiryn). I researched the process and did it myself."

A year later, she launched Pixie Printz to sell the accessories – along with Imprints of the Heart, a nonprofit that provides memorial jewelry to those who are losing or have lost a loved one, free of charge. "Keepsake Consultants" make home, hospital, hospice or funeral home visits to help create the items, or can pull prints from ink or drawn prints. She tries to get the whole family involved in the process.

"The jewelry is captured by touch," says Stanley, who also has sons ages 11, 9 and 5. "It's a way to have a forever piece of your child you can literally carry around."

Each is made of silver, rolled by hand, fired in a kiln and polished. Elle Bird, a spin on Leiryn's "L" Bird nickname, is currently based in Stanley's home, but she hopes to open a studio and Mitten Marketplace within a year or so.

And as for Leiryn? This Tinkerbell-loving child is now 6, just started first grade and, mom says, apart from her cancer, is living a healthy life.