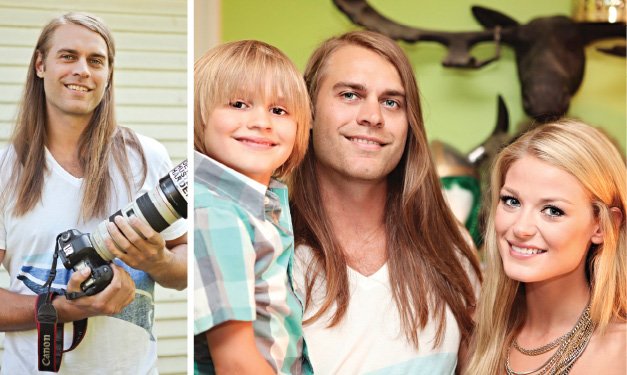 That’s a sampling of the A-list artists Joe Gall has captured live on-stage, from pit-level, with his pro Canon camera.

His color-soaked pix are splashed all over the web and in print, from local mags, like Real Detroit Weekly and Metro Parent’s own January 2011 cover, to Rolling Stone and Spin. With good reason. Gall’s got a razor-sharp eye for snapping stars in motion – whether bands, models or Detroit nightlife at large.

“It’s great,” Gall, 27, says. “I get the best seat in the house that no one can even buy – and I’m paid.” But there’s one little rock star he’s photographed more than any other: Jayden, age 5. His mop-topped son.

“We could have a flipbook of his entire life,” the Royal Oak dad laughs. “It’s like everything we do, gets a picture taken of it.”

So how’s a small-town kid from Romeo wind up Kid Rock’s personal photog for a year? Flip back to age 13. That’s when Gall’s cousin gave him a guitar and a boom box. The dial was soon stuck on 96.3 The Planet, and the tail end of the ’90s grunge era.

“I started hearing all this stuff I’d never heard before,” from Nirvana to Smashing Pumpkins. “I was instantly hooked.” Not long after, he got a hold of dad’s old ’70s Ricoh XR7 point-and-shoot; then, a how-to book. Gall was soon firing away, working low-cash jobs to pay for film.

His two loves matched up fast: “Ever since I could drive I’ve been going to concerts, sneaking disposable cameras in.” Later on, he and a tight group of friends – many in bands and into fashion design – skipped Friday-night bar hopping and instead got together for “photo shoot parties,” brainstorming and crafting brands.

The self-dubbed “oddball in the family,” Gall was determined to not follow his parents’ 9-to-5 footsteps. And, when his stint editing DVDs for high-end auto markets dried up three years ago, the Specs Howard grad jumped, turning a hobby into a for-hire, on-location, fulltime gig.

His rep spread fast. And he keeps super-busy. Clicking around his Flickr page turns up a whirlwind of shots. Projects pop up constantly. “I’m the kind of person that moves on day-to-day,” Gall says. Luckily, he’s got Google Calendar – and long-time girlfriend Channing Pierce. “It’s pretty much like we’re married,” says Gall. “We feed off each other, helping each other.” Jayden calls her “The Chan” (his birth mom, who has shared custody, lives nearby).

These days, Gall shoots his pick of shows. “I tend to go to rowdier stuff. I like getting into the crowd” – not just the designated photo area. “That’s what’s real.”

But he’s hit cool curveballs. Movement in Detroit turned him on to techno. And, while no big fan going in, he thought Kiss was killer: “It’s all visual. I was blown away!”

Add Kid Rock, a fellow long-locked Romeo dude, to that list. Gall covered the local rapper’s 2009 Rock and Rebels Tour. “I wasn’t really that big of a fan of his music before,” Gall admits. “It totally changed my perspective. He’s such a hard worker. He’s totally involved.” He also knows how to throw a helluva 40th birthday concert.

Gall will never forget it – partly because, on the way to the after party, he got trapped in a stalled elevator with Cindy Crawford and Red Wing Kris Draper.

Anymore, the fame factor doesn’t faze him (though “It’s always fun to brag to my friends!”). It’s a lesson he hopes to pass on to Jayden. “For now I just want him to have fun and just learn how to be respectful. Not everybody has these opportunities. I don’t want him to be too cool or showing off.”

Plus, his job isn’t always all-access. Take the 2010 Miss USA pageant. Trying to score shots of Miss Michigan at the Vegas competition was almost impossible. “She was so off-limits.”

Which was weird – since he’s been dating her almost four years. Yep. Pierce, a local model, won the state title in her first-ever pageant. (By the by, watch for them on-screen later this year: Both have cameos in robot boxing flick Real Steel.)

They’ve brought their own style to suburban life, from the faux moose head and wigs in the living room (all photo props) to the father-son BMX skate-park trips.

“It’s so cool that we can share the same interests,” Gall says. Jayden already rules the 8-foot ramp on his mini motocross bike – and lines up his Teenage Mutant Ninja Turtles for photos. “Nothing beats having your kid look up to you.”

And vice versa. “If I didn’t have Jayden, I’d be a completely different person. It settled me down, and put me in check. It was pretty crazy before then.”

Case in point: Touring the semi-pro extreme-biking circuit, Gall took his share of nasty spills (a video of one’s on the Tosh.0 website – ouch). Now? He and the fam are more focused on growing “competition pumpkins” in the yard. If one hits 100 pounds, they’ll carve it into a boat for a regatta. “Jayden gets a kick out of it.”

Gall really digs his garden, also stocked with tomatoes, peppers, cucumbers and squash. For the record: There’s a long line of farmers and gardeners in his family.

“(My dad) was really surprised – me being the non-conforming one,” Gall laughs. “There’s only so far you can fall from the tree.”

Photos by Kristen Hines
This story appeared in the August 2011 print edition of Metro Parent.