For Mom Wendy Achatz, Life is a Bowl of 'Four Berries' 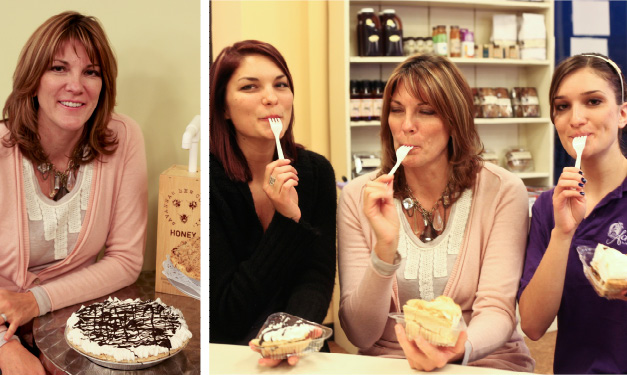 This story appeared in the December 2010 print edition of Metro Parent.
Photos by Kristen Hines

How do you invent a signature, mouth-watering dessert like the Achatz Handmade Pie Co.’s Michigan Four Berry?

"It was an accident," recalls Wendy Achatz (rhymes with "jackets"), who had a bit of leftover raspberry, blueberry, cherry and blackberry filling.

"We threw it all in a bowl and stirred."

Nearly two decades later, the result still earns awards and lures devotees to her family’s seven (and counting) local shops. Ditto for some 36 other varieties, from luscious creams to hearty potpies. At about three pounds and $14 a pop, they’re crafted the old-fashioned way: finger-crimped crusts, preservative-free and from-scratch Michigan ingredients. Just like when Wendy started selling them in 1993 from a van at a Macomb County flea market.

But success has been no mistake for this Armada mom of five – despite the fact that her flavorful tale begins with canned soup, instant mashed potatoes and KFC.

Raised on welfare by a single mom in Mount Clemens in the ’60s, Wendy admits her mom "wasn’t a baker or a very good cook." The first real taste of home cooking came at age 10: Her mom remarried an Italian man who loved baking bread and pizzas.

Then, things took a Little House on the Prairie-style turn: The family abruptly moved to 300 acres in Tennessee to "live off the land." With no plumbing or electricity, Wendy and her little sis helped chop wood and haul water. Step dad worked at a sawmill. Mom drove nearby Amish families into town for groceries.

"It was a very hard life, but it was a great experience," says Wendy. "I am so thankful for the gift of poverty my parents gave me.

"I don’t take anything for granted."

While down south, a home ec teacher also drew out Wendy’s natural knack for baking. By age 16, Wendy and her family returned to Michigan, where she moved out on her own and started waitressing at Achatz Family Restaurant in Armada. At 19 she was doing all the diner’s pastries and desserts. Not long after, she was married to the owner.

Place to eat out: Anita’s Kitchen in Ferndale or Palm Palace
Winter fun activity: Ice skating in the yard
Holiday tradition: Christmas Eve buffet at her in-laws’ house
Food: Anything from The Best of Veggies & Co. by Mary Bernt
Hero: My husband.
Achatz pie: I don’t have a favorite. They’re like my kids!
Other dessert: Häagen-Dazs Swiss Vanilla Almond ice cream.

But the defining pie moment arrived about a decade later. Exhausted from the constant work, the couple had sold the restaurant. And, almost 29 and very pregnant with the final of her five kids, Wendy found herself hawking her pastries at that flea market.

"I must have looked like a little old pie lady," she laughs. "I was on my last penny." But by season’s end, sales shot from 15 slices to 1,000. And today, you’ll find Achatz pies anywhere from Costco to upscale restaurants, all still handcrafted at the company’s Chesterfield bake house. They’ve even been tagged as a Michigan "company to watch."

"There’s so much potential. We could open up 50 stores in the next two years," Wendy says. "It’s just a really hard balancing act."

Oh, yes: How has she juggled it all with a big brood of five? Her co-founder and hubby Dave, for one. "We work great as a team," she says. "I really lucked out." That covers anything from food prep (he’s the early bird, she’s the night owl) to home schooling to biking together (she says she’s never dieted!).

In turn, her kids, now ranging from their late teens to 20s, have caught the culinary bug, too. The younger boys love cooking. Just like mom, the three girls are all vegetarians (Sarah’s vegan). And, of course, they’ve all helped out over the years – especially during this time of year, when 40 percent of business happens.

Are you looking to get away with your family or spouse? Check out the all-inclusive resorts in Michigan for some family fun or alone time with your significant other.
Read more
Tweens & Teens

As teens get older, they might make friends with an older person — maybe even a young adult. Is this OK, and what rules should you enforce if you allow it?
Read more
Guides