This metro Detroit funnyman has a passion for humor on the fly, both on-stage as a professional and behind the scenes as a parent. 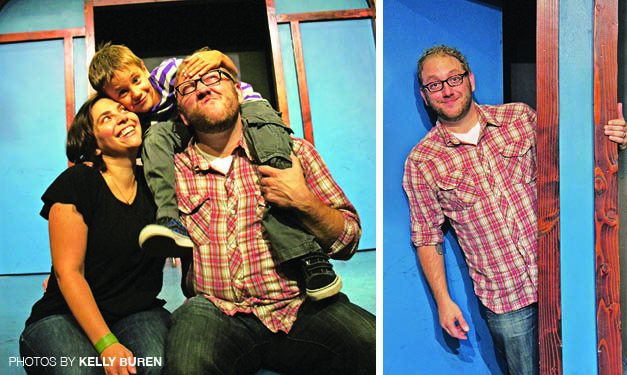 Humor, creativity and the ability to think on your feet are all valuable parenting skills. As it happens, they’re also pretty essential to improv comedy. PJ Jacokes uses all those and more as dad to 7-year-old Dax and as the director of Go Comedy! Improv Theater in Ferndale.

Jacokes had a lifelong love of performing. After college, he began taking improv classes at The Second City in Detroit, eventually becoming head of its training program. When he was ready to move on and let his friends and colleagues know, a former student, Gerald Knight, raised the idea of opening a theater together. Knight now serves as president. Friends Chris DiAngelo and Tommy LeRoy were also in the founding group and remain involved – DiAngelo as artistic director and LeRoy as technical supervisor and operations manager.

Gig: Producer/director, Go Comedy! Improv Theater in Ferndale
Age: 35
Hometown: Farmington Hills
Wife: Lisa Jacokes
Kid: Dax, 7
Pet: Sydney, a “mutt of indeterminate parentage”
Dad declaration: “Lead by example. I learned a lot from my father and watching how he would treat people and act. I hope Dax learns the same from me.”

Improv comedy, as anyone who has ever watched in amazement as a team creates a complex and hilarious scene out of two words and a prop can attest, is different than Saturday Night Live-style scripted sketch comedy.

What sets improv apart, essentially, is that it involves working with other people to come up with a comedy sketch out of a very thin premise. Improvers hone their skills – and sometimes base performances – around games that have very specific rules, but are different every time based on prompts from the audience (think Whose Line is It Anyway?).

“A surprising number of people don’t believe it’s made up,” Jacokes says. The goal is making a scene fun to watch – not hitting the punchline, as is the case for standup comedy. “There are no stars in improv. If you’re trying to be better than anyone else, you’re failing.”

Jacokes has done other types of performing, from acting to music. He says improv is its own special thrill because it’s so different than any other performance. “The thrill of creating something out of nowhere is like a rollercoaster,” he says. “In improv, you and the people you play with are finding your truest self in those moments, and I don’t know a better feeling. The thing about improv is you have these moments that are truly magic, where you come out at the end and don’t know how you got there.”

A typical 9-to-5 day involves answering more than a hundred emails, doing in-house marketing like posters and marquee boards and, currently, because he’s directing the next show, he’ll be finishing scripts, working on the program and heading up rehearsals. A few nights a week, he’ll come back in the evenings to host, direct or perform in a show.

Wanna laugh your butt off? Go Comedy! Improv Theater offers tons of improv fare here in southeast Michigan – most of it ideal for a parents’ night out. It’s located at 261 E. Nine Mile Road in Ferndale.

He also sometimes teaches classes, which is his favorite thing to do at the theater – and the thing he probably does least because of his other responsibilities, he says. Go Comedy! runs improv classes for kids and adults year-round, and they are planning to create some family-friendly shows on Sunday afternoons later this fall. He adds that kids are natural improvisers, and the first thing they teach adults is to be kids. “The secret to teaching kids improv is pretty much just not to teach them anything,” he says.

Balancing fatherhood and the theater is not easy, he says. Because he can set his own schedule to some degree, he keeps the nights when he has his son sacred – and doesn’t come back to the theater except in extreme circumstances (he shares custody with Dax’s mom and has him Mondays and Tuesdays).

Unsurprisingly, Jacokes’ improv background influences his parenting. “In improv, you never want to direct the scene from within, and I feel like as parent, I’m not a dictator. I want to guide Dax on his path, and put my foot down when I need to, but the river he’s in, he’s going to be in. I can set up a couple of dams, but I don’t want to be oppressive with it.”

Paying attention – another important improv skill – and staying aware of the person his son is also are big parts of his parenting philosophy, he says. “It’s hard to nurture if you can’t understand the nature.”

Family is key in Jacokes’ life – both of his siblings, Peter and Julie, also work at Go Comedy!, and Peter’s wife also performs there. Peter is stage manager, a frequent onstage performer and directs some shows; Julie manages the box office. Working with his siblings has been a lot of fun and brought them closer together, he says.

“I’m four years older than Pete and six years older than Julie. As kids we played, but there was a whole period where I was older enough that we didn’t. So once we all kind of settled down, it’s been great to work with them,” he says.

He and Peter have done a few two-man shows together, including one called Silent Too, in which they performed entirely without words. The sibling connection adds a lot to their creative collaborations as well, Jacokes says. “We have some unspoken communication that’s on a far deeper level than people I have played with for years. I will know what he is about to do – there will be no doubt in my mind where he is going with something, and that’s a lot of fun.”

Go Comedy! opened just as the recession was getting into full swing. Despite that, people have supported the theater – perhaps because a city that’s been the punchline itself so often knows that humor helps us survive.

“Detroit is an improviser,” Jacokes says. “Improv is about taking what you’re given and finding a way to make it work. If that’s not a motto for the city, I don’t know what is.”