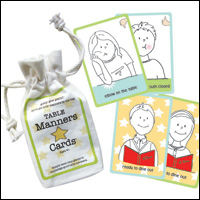 In the 1991 movie Hook, Peter Pan and the Lost Boys sit down for an imaginary feast that turns into one messy, colorful food fight. It’s a kid-pleasing scene in a fun family film, but parents sure wouldn’t want it played out in their homes. Imagine if your child was flinging mashed potatoes or a turkey leg across the table during Thanksgiving or Christmas dinner.

Sure, it would make for interesting post-feast conversation, but we’re certain you don’t want your kids to act like barbarians at the dinner table – whether they are attempting to start a food fight, chewing with their mouths wide open or putting their elbows on the table. So, this year, help them improve their less-than-formal dinner etiquette with the Table Manners Card Game from Golly gee-pers!

This bag of table manner tricks, which was created by mom Staci Ericson after her daughter’s sloppy eating habits were embarrassingly pointed out by another parent, includes 14 illustrated cards depicting different dinnertime behaviors.

Similar to using flashcards to learn a subject in school, the table manners game shows kids right from wrong with the appearance of either a thumbs-up or a thumbs-down on each card. Players must compete for thumbs-up cards and try to avoid getting any thumbs-down cards.

This year, the game was listed as one of Dr. Toy’s 100 Best Children’s Products and Dr. Toy’s 10 Best Socially Responsible Products.

School your kid in table manners and avoid a food fight on Thanksgiving and every meal by purchasing these cards online.