Hairspray at Bonstelle Theatre in Detroit 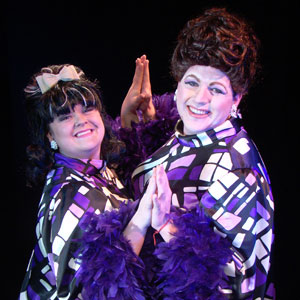 The musical is based on the John Waters 1988 film, which starred Ricki Lake in the role as Tracy Turnblad, a teenage girl in 1962 Baltimore with just one goal: To land a spot dancing on The Corny Collins Show.

Tracy makes it on to the show with her kickin' moves – which she learned in detention for having hair that was too high – making her an instant celebrity. And what better way to use her newfound fame? She helps integrate The Corny Collins Show during a time of racial segregation in the United States.

While the underlying themes of the show are serious, the action-packed dancing and upbeat songs ensure that the production never gets too heavy. Plus, a budding love affair with teen heartthrob Link Larkin is sure to keep audiences entertained!

A pre-show discussion takes place on Friday, April 20 at 7:15 p.m. During this time, experts discuss the themes of civil rights, racial integration and '60s music. And a post-show discussion, which takes place Sunday, April 22, features a question and answer session with the cast, including 33 students.

The Bonstelle, located on Wayne State University's campus, is a 1,200-seat Broadway-style venue where the university's ungrad company performs. Hairspray is final show of the department's 61st season. The cast of the show includes WSU students from Dearborn, Detroit, Wixom, Royal Oak, Clinton Township and more.

Tickets for the production are $25. Catch the show at 8 p.m. on Fridays and Saturdays and 2 p.m. on Sundays.

See the Metro Parent listing for more on Hairspray at the Bonstelle Theatre in Detroit.