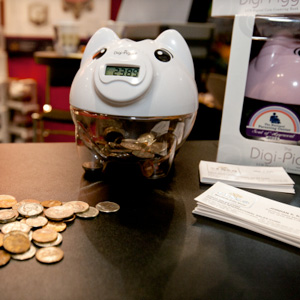 The toys of today are all about technology. Even old toys are being brought back to life with new interactive, touch-screen twists. Anything with an LED screen or innovative technology will certainly top the must-have lists for 2012. Here are some of our favorites at Gimme, Gimme!

Like it or not – Hasbro’s iconic Furby is back. And he’s gotten quite the makeover. The biggest toy of the late ’90s has been spiffed up for the iGeneration. One noticeable change is Furby’s new set of more-expressive LED eyes. But the biggest update is probably the new iOS app that will link your iPhone or iPad to Furby. With the app, you can feed Furby virtually and translate his “Furbish” babbling into English! Buy one at Target for $54.

With the Air Hogs Hover Assault by Spin Master, obstacles will never get in the way of your RC car driving. This hybrid heli-buggy fuses gyroscope/helicopter technology with a speedy RC car for unlimited terrain possibilities. The Hover Assault shoots four plastic missiles, so you know it means business. Get one at Kmart for $49.99.

The piggy bank of the future is here! No more rolling up coins or going to the coin counter when this bank, made by Cisco, gets full. This guy’s snout displays an accurate count of all the dough he’s holding in his belly. After Digi-Piggy gets full, just empty and reset to zero. Nab one at whateverworks.com for $14.99.

How do you update Barbie for 2012? Give her a digital camera, of course. Only the Mattel people have taken it a step further and actually turned everyone’s favorite doll into a digital camera. Change Barbie’s shirt design with any number of preloaded graphics – or take your own and display it instantly. Upload pics you take onto your computer, too, using the included pink (naturally) USB cable.

These creepy robotic bugs are one of the hottest toys of 2012. Different models include a crab, spider, ant, inchworm and scarab beetle. The beetle (which runs around $15) propels itself forwards and backwards – and is capable of popping from its back onto its feet. Buy this model and more from Fat Brain Toys.

It’s like Barbie’s Dreamhouse went green. This model house science kit by Thames and Kosmos is great for teaching your budding scientist about sustainable living for the 21st century. The whole model runs on alternative energy like solar, wind and bio fuels. Guiding construction is a series of designed experiments that asks the builder to imagine they are on a remote island, harnessing the earth’s energy to survive. Buy yours for $149.95.

Here’s a pet you’ll never have to worry about cleaning or feeding (finally). In the same vein as Furby and other digital pets, the electronic goldfish bowl is as simple as it sounds. Just add batteries, fill with water and watch your fish swim. Acts as a pretty night light with a multi-colored fading LED light to illuminate the bowl. “Never hungry, always happy!” Buy one on ThinkGeek.com for $19.99.