How the Grinch Stole Christmas! The Musical at the Detroit Opera House 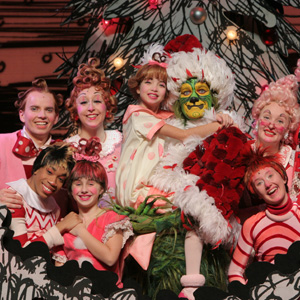 A singing Grinch can't be all bad, right? Families find out Dec. 18-30, 2012, as Dr. Seuss' How the Grinch Stole Christmas! The Musical stops by the Detroit Opera House.

The critically acclaimed show features well-known tunes like "You're a Mean One, Mr. Grinch" and "Welcome Christmas" from the original animated TV special. Max the Dog narrates this seasonal story of the scheming Grinch and his plan to ruin the holidays for the cheerful Whos.

In this touring production, Stefan Karl stars as the mean, green guy whose heart is "two sizes too small." Kids will know Karl from his role as Robbie Rotten on Nickelodeon's LazyTown.

This show, brought to the D by Broadway in Detroit, broke box office records for two years when it hit New York's Broadway in 2006 and '07. So what made the show such a hit? Take the entire family to see why it's still luring crowds! Even if you and the kids are familiar with this classic tale – you've never seen it like this!

The musical runs Dec. 18-30 – except Christmas Day. Show times are as follows:

Tickets range $25-$75 and are available at the Fisher Theatre and Detroit Opera House box offices and Ticketmaster.

See the Metro Parent listing for more on How the Grinch Stole Christmas! The Musical at the Detroit Opera House.