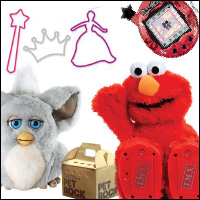 I remember a long-ago Christmas when everyone wanted a Pet Rock. For the crazy price of $3.95 (in 1975 dollars!), you would get a rock, a carrying box (with holes in it so the rock could breathe) and a booklet explaining how to care for your new rock.

The man who thought up that little marketing marvel soon became a millionaire and lives happily in California.

As a kid I always wanted the fad toys, and then usually didn’t like them. Somehow it was the getting them that was important.

Probably the biggest get in the past two decades was the Tickle Me Elmo doll. They were so in demand in 1996 that a Walmart employee in New Jersey suffered a broken rib and concussion when attacked by desperate holiday shoppers as he opened a shipment of those sweet little dolls. Stupid! Crazy! Merry Christmas!

I vowed to never be one of those crazy moms, needing a toy for my child just because the masses deemed it a ‘must have.’ And that’s where I stood when first I heard of Silly Bandz this past May.

Patti told me about the fancy rubber bands that stretch over little wrists like bracelets, and that once removed reverted back to their original, interesting shapes.

Clever Patti didn’t bother ASKING me for any, mind you. She’s too smart for that. I might have said "No." She simply mentioned it to me – to keep me up on popular culture, apparently.

A few days later we passed a store where she spotted a display of these bands through the window (sharp eye!). They were only $3 for six bands, she told me with excitement. My first thought was, "Good, if they’re that over-priced I will never buy any!"

"Patti, don’t you see?" I said. "The only people benefiting from these things are the brilliant people who thought them up. Imagine, six of them for $3 – that’s 50 cents for a rubber band, for goodness sakes. I wish I’d thought of that!"

Patti thought quietly about it. Then whenever the issue came up at school, she reported back to me that she had informed other kids that the product was a sham.

Hearing my own cynical talk coming out of my 9-year-old tickled me briefly. But soon I started to feel like a mean old miser. Here’s this cute, colorful, innocent little product that kids are trading with their friends at school. Patti had already received three from her friends. How nice. Kids gave them as gifts, too. That’s pretty harmless, I thought, weakening.

And then, everywhere, I saw little girls with rainbows of the darned bands up their arms. "My mom gave me these, and grandma gave me these and my dad brought these home from a business trip," one cute little red-haired girl told me when I was out walking the dog. She loved them!

So two months after vowing I would never spend money on such a gimmick, I faltered and ordered my girls sets of Silly Bandz from Amazon (much cheaper and no brawling required). I chose themes to suit their personalities – princess bands for girly Suzi and underwater creatures for science-y Patti. And I felt good that they were so happy to have them.

Is that so bad?

I still hate the inventors – for their dastardly idea, their newfound wealth and for successfully manipulating me and millions of other parents and grandparents. But if Suzi will bestow upon me one of those cute little pink crowns for my wrist, I think I’ll get over it.