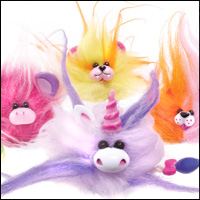 Who doesn’t remember Trolls – the stubby little dolls whose bright hair stuck straight up as if they’d just put their wee fingers in an electrical socket? Their faces were sweet and slightly odd – like a mix of a baby and an old man.

These dolls hit stores in 1959 and were instantly popular – especially with the kids of the ’80s. A new generation of kiddies – mostly girls – were introduced to an animated version of this loved collectible in 2005 with the series Trolls.

Well, we’re not going to tell you about a new Troll doll – just something that instantly made us think of these furry creatures from our childhood. We’re talking about Kachooz!

These pencil toppers are a throwback to the old-school doll (minus the body) – with their colorful, wild hair. But, unlike Trolls, they have adorable animal faces that make these toppers oh-so-sweet!

Each topper is called a Moop, and there are a variety of Moops to collect. From 2faced and rainbow to punk, sparkle, Mohawk and more – these collectibles are the perfect perk for your kids’ pen – or any other similar-sized writing tool.