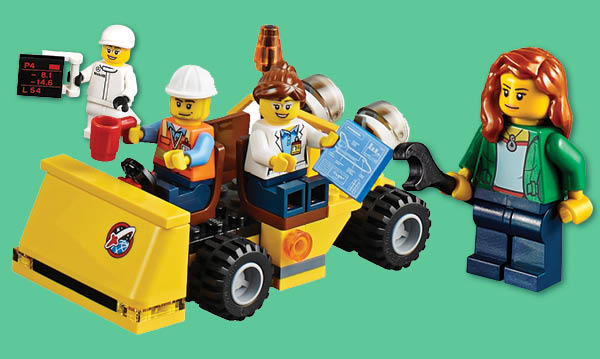 It’s a fact: Kids love Legos! We take a look at what this beloved company is up to – including two big changes regarding its production and products.

Lego is ditching the petroleum from its plastic bricks. The company announced it’s investing $1.5 million to create a “sustainable materials” center at its headquarters in Denmark to reduce its carbon footprint. Last year, 60 billion-plus Lego pieces were made from over 77,000 metric tons of oil-based plastic, Chemical & Engineering News reported. The center aims to make both Lego’s blocks and packaging solely with sustainable materials by 2030.

Several new toys have “quietly” but steadily brought smart Lego ladies to the scene, Scientific American’s blog reports. The “Spaceport” series, for one, has female aerospace engineers and astronauts. “Deep Sea Explorers” appears to feature a nod to oceanographer Sylvia Earle, SA notes. And the “Dune Buggy Trailer” and “McLaren Mercedes Pit Stop” boast women mechanics that aren’t afraid to get their yellow claws dirty. It’s somewhat new turf for Lego, but not totally foreign: Its first female lab scientist minifigure, Professor C. Bodin, made her debut in 2013. And last year, a fan-designed limited edition “Research Institute” set – with a female chemist, paleontologist and an astronomer – flew off the shelves. The sets mentioned range about $9.99-$119.99. Find them at shop.lego.com.