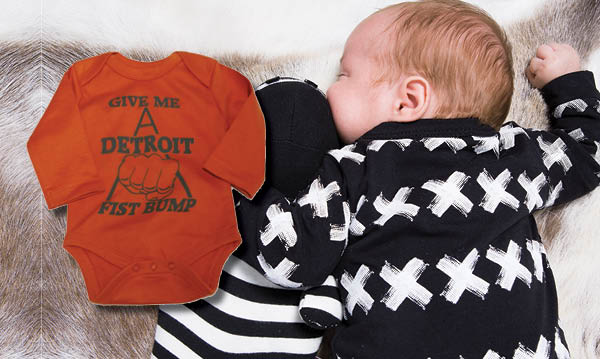 Little High Flyers is taking the children’s boutique concept to new heights. Since opening in Midtown Detroit in November, Corina Baldwin’s shop has drawn parents with its mindfully made and uniquely designed toys, clothes and gear.

For Baldwin, the store was inspired by struggles she had shopping for her own children. The assembly line produced and strictly gendered styles bothered her.

“With my daughter, especially as she grew older, it was bothering me that things started to get more – maybe sexualized is a strong word?” says Baldwin, who also has a 2-year-old son. “But now she’s turning 10, so it’s definitely starting to be that. Even when she was 3, I started to see styles that were sometimes sexist.”

So, after leaving her job a crisis therapist to spend time with her family, Baldwin sought out gender-neutral, fair-trade and organic items. That evolved into selling these wares at local markets. And, after big feedback from fellow moms, Baldwin says an open-door shop just clicked. “It was really because of life experiences, my style and my wishes for my own children that I ended up taking the chance.”

Today, shoppers enter a welcoming space where parents can find handcrafted products – mostly geared at newborns to about age 6 – while their kids wander the bright green floor to examine toys occupying playhouse-shaped shelves. As for the “high flying” theme, Baldwin says that also came about naturally.

“It was really meant to be for unique children that want to aim higher and get out of the box instead of everything looking the same,” she says. “I think that’s kind of our approach with our children too, sort of being more ambitious and different from everybody else.”

Baldwin’s faves for her own kids are also store staples: