Mary Poppins at the Fisher Theater 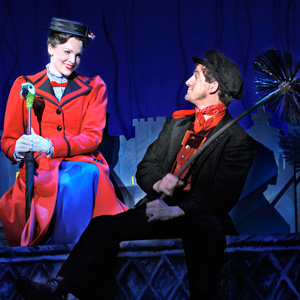 Join Mary Poppins and Bert, the charming chimney sweep, on their national tour of the acclaimed musical Mary Poppins, which comes to the stage at the Fisher Theatre in Detroit for eight spectacular shows, Oct. 23-28, 2012.

Adapted from the popular Disney movie and classic book series by P.L. Travers, the musical is the story of two unruly children who find "the perfect nanny" who teaches them etiquette and life lessons through song.

The Broadway show includes many of the classic songs from the 1964 Disney movie – and all new dance numbers brought to life with "spectacular stage-craft."

Thursday Oct. 25 is a special kids night – and kids' tickets are only $9 with the purchase of an adult ticket. There will be pre-show activities starting at 6 p.m. including a story time, free popcorn and arts and crafts. Note: Use promo code "KNOB" when ordering your tickets.

Children under 5 will not be admitted to this or any performance.

The show runs 2 hours and 40 minutes with an intermission – and ticket prices range from $40-$95. Show times are as follows:

This hit Broadway musical, which has been nominated for seven Tony Awards, took home the 2007 Tony for Best Scenic Design.

And just like the film, the stage show is a delight for families – packed with "high-flying" fun!

See the Metro Parent listing for more on Mary Poppins at the Fisher Theatre in Detroit.

Help your little one grow into a confident young adult with these fun activities.
Read more
Macomb County Activities