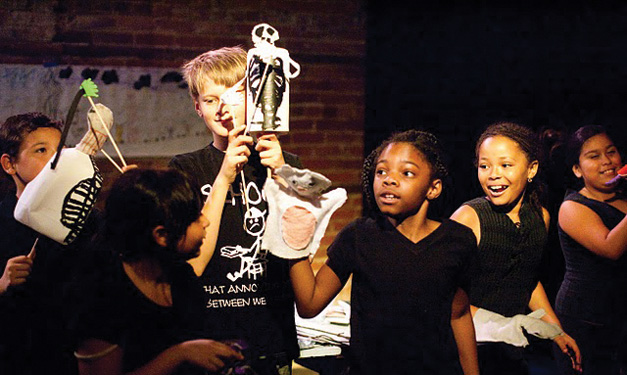 For 20 years, the Matrix Theatre Company has delivered a little drama in southwest Detroit, delighting parents and kids alike with its community shows.

Fostering a love of performing arts in local children is a strong theme at Matrix. Its teen company puts on four to five productions every year, and most of the scripts are written by the teens themselves. The theater also offers after-school and in-school performances, playwriting and puppetry programs.

The group has performed its shows in schools and organizations outside Detroit – and it has a great impact on the kids who participate, Scobie says.

Considering social issues is also a key part of the theater’s mission. This year, Scobie says, the teen company will be exploring the ideas of culture and identity on the boards.

Reflecting on contemporary affairs “really gives the students a feeling of efficacy, that their ideas can take shape and really affect change in their communities,” Scobie says.

Teens realize “that they have the power to educate people about what’s really going on, and they can do it using their own voice and their own words and their own methods.”

Take your family to play putt-putt at one of these unique indoor spots.
Read more
Health